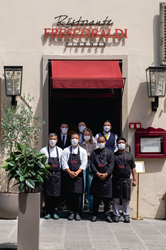 The Team at Ristorante Frescobaldi


On June 18th, amidst great fanfare and excitement, Ristorante Frescobaldi throws open its doors once again in Florence’s Piazza della Signoria, with its nonpareil venue providing an unparalleled “stage view” of one of the world’s most priceless sights: Michelangelo’s David. Truly the perfect spot for a gourmet moment right in the beating heart of a city that is one of the world’s most celebrated centres of culture, art, and fine wine and food.

Just a few steps from the Galleria degli Uffizi and boasting a magnificent, open-air panoramic view of the historic Palazzo Vecchio, Ristorante Frescobaldi offers elegant comfort and classic Tuscan hospitality, in an utterly unique setting where guests may enjoy lunch and dinner accompanied by the masterpieces of Michelangelo, Donatello, and other Florentine geniuses, all of this the creative achievement of Spanish interior design genius Lazaro Design.

A showcase where the absolute quality of Tuscan cuisine plays a refined duet with the wines of the Tenute Frescobaldi, Ristorante Frescobaldi has become the Florentines’ preferred meeting-place both for business encounters and more informal moments, as it has for tourists as well. All treasure it as a one-of-a-kind tribute to art—given its unique location--but to culinary art as well, with a menu that privileges the rich Tuscan gastronomic tradition.

“All of us should greet this re-launching with the enthusiasm it deserves,” commented Diana Frescobaldi, Director of Dei Frescobaldi Retail & Restaurant. “The historic centre of Florence is always breath-taking, particularly in his period of the year, with the contrast between the blue of the sky and the smooth white of the marble statues, and Ristorante Frescobaldi is right there in the midst of it all. Our doors are open to welcome you for an exciting Tuscan adventure offered by our two new menus, “Amidst the Vineyards” and “On the Tuscan Coast,” each with our Frescobaldi wines. So come and enjoy with us the re-opening of our beloved Florence!”

Florence thus can once again enjoy, while observing safety measures and social distancing, its famed classic cuisine and savour the artistic delights of Michelangelo’s David in Piazza della Signoria.

I RISTORANTI FRESCOBALDI
The extensive Frescobaldi family experience in the restaurant sector led in 2002 to the establishment of the first Ristorante & Wine Bar “Dei Frescobaldi,” in Florence. The menu showcases classic Tuscan dishes made from the highest-quality local ingredients, all paired with Frescobaldi wines, both in bottle and by the glass. 2015 saw the opening of a Ristorante Frescobaldi in the United Kingdom, thanks to the first joint venture between Frescobaldi and the Good Food Society, a project promoted by Levents Buyukugur, businessman Sanjay Nandi, and Diana Frescobaldi. Located in London’s Mayfair District, the restaurant is characterised by its warm, inviting atmosphere and offers a high-quality interpretation of Tuscany’s historic cuisine, paired with Frescobaldi wines. In 2017, the Ristorante in Florence became the Ristorante Frescobaldi Firenze and moved to a prestigious, new venue opposite the city’s Palazzo Vecchio.

About Frescobaldi Toscana | en.frescobaldi.com
Frescobaldi Toscana, the leading wine producer of Tuscany and one of the most historic and respected wine companies in the world, combines centuries of tradition with progressive winemaking techniques and practices. Founded in the 14th century and a supplier of wines to the royal courts of Europe for generations, Frescobaldi Toscana is still a family-owned company today. Comprised of seven distinct estates totaling approximately 1,300 hectares, Frescobaldi Toscana produces terroir-driven wines utilizing only the grapes grown in its own vineyards. The company continually upgrades and modernizes its grape growing and winemaking operations, maintaining a relentless focus on producing unique wines that express the individuality of each unique terroir from which they are produced.