From Highway Engineering to Revealing a Roadmap to Heaven

Author Richard Dunlap Shares His Miraculous Story of Healing, Guide for Healing Others in His New Book 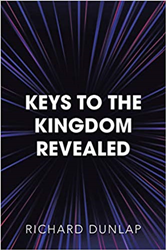 I want each of us to experience the filling of the Holy Spirit, so that we can be used to heal the sick and diseased.

Richard Dunlap attended a revival on August 23, 1997, where he experienced a supernatural healing of his cancer. Since then, he has experienced prophetic dreams, visions and testimonies, which he is now sharing to heal others.

In “Keys to the Kingdom Revealed,” Dunlap shares his experience of being prayed over, seeing his cancerous arm leave his body, and waking up healed from the bone cancer that had afflicted him. In his new book, he shares the keys to the kingdom of heaven that have been revealed to him over the past 20 years.

“Just as God healed me, through a woman at that revival,” Dunlap said, “he can use us to heal one another. I want each of us to experience the filling of the Holy Spirit, so that we can be used to heal the sick and diseased.”

The “keys” Dunlap refers to include: keys for being filled with the Holy Spirit to bring healing to the body and deliverance of evil spirits, keys to spiritual warfare and how to be protected, keys to generational curses and the prayer to remove them, keys to the revival of the Christian church and how to maintain it, as well as keys to releasing the Holy Spirit’s presence in church service.

“This book contains revelations from the Holy Spirit in these days,” Dunlap said, “for all Christians who want to minister in kingdom power for the healing and deliverance of sickness and evil spirits.”

About the author
Richard Dunlap grew up in southwest Portland. After high school, he graduated from Oregon Technical Institute with a degree in highway engineering technology. He married his wife, Beverly in 1967, and spent the next 45 years working with several insurance companies as their director of loss control. Richard and Beverly have three children and five grandchildren. To learn more about the author and his book please visit, https://www.xlibris.com/en/bookstore/bookdetails/793175-keys-to-the-kingdom-revealed.