From Rwanda to the White House: South Dakota Mines Alumnus Makes His Mark 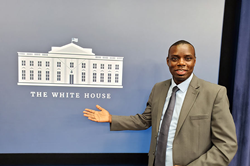 Emmanuel Tuombe, a civil engineering alumnus of South Dakota School of Mines & Technology, was honored at the White House Entrepreneurs and Innovators Summit.

“I knew it was not going to be easy. But I had seen the worst in life … and I had faith that everything was going to work out,“ Emmanuel Tuombe, owner of ABES Engineering, Inc.

Thirteen years ago, Emmanuel Tuombe arrived at South Dakota School of Mines & Technology from Rwanda with little money in his pocket and no connections to the community. What he did have was optimism, hope and a drive to succeed.

Fast forward to February 2020. The Mines civil engineering alumnus arrives in Washington, D.C., to accept an award as one of this country’s Game Changers at the White House’s Entrepreneurs and Innovators Summit, held during Black History Month. “The experience was so overwhelming,” Tuombe says of walking into the West Wing to receive the honor. “I knew that it was something bigger … that it was beyond myself. I was so excited because of all the people who I was representing.”

Tuombe, who speaks six languages, grew up in Rwanda following the 1994 genocide, when 800,000 people were killed over the course of 100 days. He witnessed firsthand his country’s struggle to recover physically and emotionally from the destruction. Tuombe decided early on that he would become an engineer. No matter where he was, he wanted to make a positive impact in his community.

Thanks to a scholarship, Tuombe attended National University of Rwanda for engineering. It was there, while volunteering as a student on a water project, that he met South Dakota Mines civil and environmental engineering professor Dr. James Stone. Stone recalls Tuombe as a highly curious and intelligent student who asked, “a million questions.” He impressed the professor so much that by the end of the project, Stone offered Tuombe a research assistantship position as a graduate student in the civil and environmental engineering department at Mines.

Tuombe arrived at Mines in 2006, borrowing money to make the trip possible. At Mines, he skipped meals and pinched pennies to make his dream of earning a master’s degree come true. “I had a teaching assistant position, but I had to manage every single penny I had. You are in survival mode. I told myself I am going to last at this school,” he says. “I was focused on the moment.”

He dove into the international student community at the International Student Inc. house and the Ivanhoe Center on campus. He connected with professors and local churches. “It didn’t take me long before I could adjust,” he says. “I was a little prepared with my background living in a country where the genocide had happened. I had some resiliency in me.”

Stones recalls Tuombe working on a historical uranium mining impacts project in remote Harding County, SD, as part of his graduate thesis. “I remember the first time Emmanuel traveled to the field sites in the Cave Hills region,” Stone says. “He was amazed by the open space but the lack of people. In his home country, there were similar open lands, however the population density was dramatically higher than he observed there in Harding County. He kept saying ‘where are all the people?’ ”

Tuombe graduated with a degree in civil engineering in 2007 and accepted a position as a project engineer for a company in Colorado. From there, he moved to a job in Memphis, Tenn. and then Virginia. In 2015, he returned to Memphis where he decided to launch his own business, ABES Engineering, Inc. “I knew it was not going to be easy,” he says. “But I had seen the worst in life … and I had faith that everything was going to work out. “

And it did. Since its inception, ABES has grown and thrived, working for the city of Memphis on multiple projects. “I know my business needs to keep growing,” Tuombe says. “I’m looking forward to partnering with large companies so we can make a big difference in people’s lives.”

To this day, Tuombe isn’t sure who nominated him as a Game Changer. When he first received the invitation to the White House to receive the award, he wondered if it was real, even hesitating to tell many people. “I started realizing it was real when I got there, when I met a person from the Department of Energy,” he says. “Another person was an inventor. The president came and spoke about how entrepreneurs are the backbone of this country. The experience was so overwhelming.”

Tuombe says he quickly realized he was representing much more than himself. He represents people like him, immigrants and international students who come to the United States to improve themselves and the world around them.

Tuombe, who served as the director of the Rwandan chapter of the Engineers without Borders and recently started another chapter in Gabon, wants students and immigrant businessmen and women to understand that anything is possible. At the Game Changer reception, Tuombe met “high-level people that I never imagined I would meet.” He sat at the table with billionaires, met innovators and made connections with business leaders from around the country. One meeting has led to discussions about a future partnership.

He’s not stopping there. Tuombe hopes to one day meet innovators like Bill Gates and Warren Buffett. “I would like to sit in the room with the big guys, so we can share ideas and make an impact. It’s not far-fetched,” he says with the same optimism he arrived at South Dakota Mines with 13 years ago. “It might take another 13 years … but it’s what I’m shooting for. I dream big.”

He wants others like him to dream big as well. He invites them to recognize their story in his. Whether they start at South Dakota Mines as he did, or at other universities, Tuombe hopes his story can be a catalyst for their hopes and dreams. “Stand tall, be proud and dream big,” he says.