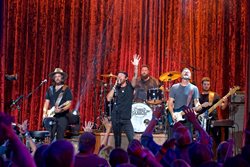 Chris Janson performing on Front and Center in partnership with Opry Entertainment.

Having the opportunity to do a Front and Center performance in New York City in front of a live studio audience was so much fun for me and my band.

Front and Center, the critically acclaimed concert series that kicked off its ninth season in July, announced that Academy of Country Music award winner, three-time CMA award-nominee, and platinum-selling recording artist Chris Janson is featured in its next episode on public television (check local listings).

Breakout country star Janson is a Grand Ole Opry member and high-octane entertainer, multi-instrumentalist, and award-winning singer/songwriter. He boasts two number one singles, as well as Music Row’s “Song of the Year” Award for his single “Drunk Girl.” His chart-topping, double-Platinum smash “Buy Me A Boat” was named the iHeartRadio Music Awards Country Song of the Year. Janson performs his hit songs “Buy Me A Boat,” “Fix A Drink,” “Drunk Girl,” and “Power Of Positive Drinkin’.” Filmed in partnership with Opry Entertainment, the trailer for this episode can be viewed HERE.

“Having the opportunity to do a Front and Center performance in New York City in front of a live studio audience was so much fun for me and my band,” says Janson. “I hope people who haven’t had a chance to see us out on the road will watch this episode and try to check us out the next time we are doing a show in their area. I’m a big fan of public television and it’s really cool to be part of this series.”

About Chris Janson:
Who is Chris Janson? He’s a “live legacy in the making” (Rolling Stone). Breakout country star Janson is a platinum-selling recording artist, high-octane entertainer, multi-instrumentalist, and award-winning singer/songwriter. In the four years since the release of his debut album, the three-time CMA nominee has collected prestigious accolades that place him amongst country music greats, including two No. 1 singles. He most recently took home the trophy for ACM Video of the Year for his Gold-certified, inspiring hit song “Drunk Girl,” which also earned the Song of the Year title at the 2018 MusicRow Awards. His chart-topping, double-Platinum smash “Buy Me A Boat” was named the iHeartRadio Music Awards Country Song of the Year and declared one of the “Ten Songs I Wish I’d Written” by NSAI. Now its onto new music for Janson: “Good Vibes,” the flagship single from his forthcoming album due this fall, is approaching Top 20 at country radio. In addition to his own successes, the talented songwriter has lent his pen to his industry peers. Tim McGraw (“Truck Yeah,” “How I’ll Always Be”), LOCASH (“I Love This Life”) and the legendary Hank Williams Jr. (“God Fearin’ Man,” “Those Days Are Gone”) are among those who have taken his songs to great heights.