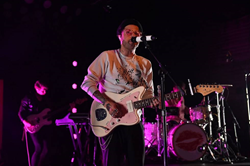 We are huge fans of catching full length live concerts on TV. Usually an act only gets to play one song when making a TV appearance. So, it’s an honor and an absolute pleasure to be able to bring a headline set to such a legendary broadcast as Front and Center.

Front and Center, the critically acclaimed concert series that kicked off its ninth season in July, announced that platinum-selling alt-pop trio lovelytheband is featured in its next episode on public television (check local listings).

lovelytheband skyrocketed in 2018 to new levels. “broken,” the single off their debut album finding it hard to smile (RED MUSIC), reached #1 on the Adult Top 40 and Alternative radio charts as well as reached the top 15 on Top 40 radio. The track amassed over 2 billion in total radio audience. The trio was filmed at SIR Studios in Los Angeles and on the Front and Center episode they perform their hit single “broken” as well as “these are my friends” and their current single, “maybe, i’m afraid.” The trailer for this episode can be viewed here.

“We are huge fans of catching full length live concerts on TV,” stated lovelytheband’s Mitchy Collins. “Usually an act only gets to play one song when making a TV appearance. So, it’s an honor and an absolute pleasure to be able to bring a headline set to such a legendary broadcast as Front and Center.”

Most recently, the band released a 3-track bundle of their fan favorite hits entitled live from london, studio two, which was recorded at the legendary Abbey Roads studio. The bundle includes stripped down versions of their singles “broken,” “maybe, i’m afraid,” and “these are my friends” with string instrumentalists. The three-track bundle is available now across all digital streaming platforms here. Along with the bundle, the trio released the music video for “broken (live from london, studio two),” which can be viewed here, and they are set to embark on their first-ever European headlining tour this November.

In addition to lovelytheband’s success in the music industry, the trio will be making their big screen debut in This Is The Year, a film by David Henrie (Wizards of Waverly Place, Paul Blart: Mall Cop 2). The directorial debut by the successful actor Henrie takes the audience through a millennial coming-of-age story about five teenagers who decide to leave their local world behind and take one last road trip before graduation to enjoy the amazing Front and Center music festival, with their favorite band – lovelytheband – where they learn more than music and discover a lot about themselves.

Full episodes will be streaming online at: https://www.pbs.org/show/front-and-center/.

About lovelytheband
lovelytheband solidified their place in alt music history when they broke Billboard’s Alternative Songs Longevity Record with a total of 75 weeks on the chart, nine weeks at No. 1 and over 278 million streams world-wide with their debut hit single, “broken.” The band’s current single “maybe, i’m afraid” hit the Top 15 on the Alternative Songs Chart, and the music video shares a powerful LGBTQ message for which they partnered with the “Beyond I Do” campaign to help promote acceptance, empathy and understanding for the millions of Americans who can be kicked out of their homes, fired from their jobs or denied services for simply living as their authentic selves. lovelytheband won a 2019 iHeartRadio Music Award for “Best New Alt. Rock Artist,” landed two 2019 Billboard Music Award nominations for “Top Rock Artist” and “Top Rock Song,” and most recently been nominated for two 2019 Teen Choice Award for Choice Rock Artist and Choice Rock Song for “These Are My Friends.” The band just wrapped up their North American headlining tour entitled “finding it hard to smile” with support from Flora Cash and Jagwar Twins, and are set to headline their first-ever European tour this fall. The trio performed on American Idol’s All-Star Duets episode, and most recently on Good Morning America.