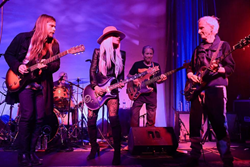 It was great working with all the artists, looking forward to making the next one!

Rock & Roll Hall of Fame inductee Robby Krieger takes the stage at the famous Village in Los Angeles for an exciting performance featuring Lukas Nelson, Orianthi, Dennis Quaid, Haley Reinhart, Lauren Ruth Ward, David Brock, and his son Waylon Krieger. Krieger wrote or co-wrote many of The Doors’ songs and performed the classic hits onstage with his guests for the Front and Center episode. The trailer for this episode can be viewed here.

“It was great working with all the artists,” stated Krieger, “looking forward to making the next one!”