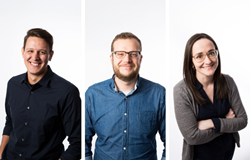 Jarad Johnson Named CEO
Jarad Johnson, a founding owner of Mostly Serious, has transitioned from president to CEO. As CEO, Johnson’s role will be focused on long-term success by maintaining the agency’s strategic vision, establishing outside partnerships, evaluating outcomes, and acting as a sounding board for long-term decisions.

“Spencer joined our team with an objective to build the systems and processes that would allow our company to scale,” said Johnson. “Over the past four years, he has led initiatives to build those systems alongside our team, culminating in Mostly Serious being named the Small Business of the Year in 2019.”

Johnson continued, “Now, we are thrilled to have Spencer transition from Director of Operations to President, where he will oversee all day-to-day functions of the business.”

Harris is looking forward to leading Mostly Serious down new avenues of growth.

“I have been honored to spend the last four years building our operational systems and working closely with Jarad and our team to develop our long-term vision and goals for Mostly Serious,” said Harris. “Now, I'm even more excited to formally lead those initiatives as we continue to grow.”

Johnson and Harris shared that their transition into a future-focused CEO and presidential role respectively is in response to an increased need to evolve processes and systems as Mostly Serious continues its trajectory of year-over-year growth.

“Our growth—in team size, client accounts, and the type of work we produce for those clients—has resulted in an increased need to put dedicated focus on the functions that will help us work toward our vision for the future,” said Johnson.

Sarah Jenkins Named Creative Director
Formerly Mostly Serious’s Senior Copywriter, Sarah Jenkins has been named the agency’s creative director. As Creative Director, Jenkins will oversee day-to-day creative work and manage team members within the agency’s creative department. Jenkins first joined Mostly Serious in 2019 and serves as a board member for a variety of Springfield, Mo.-based organizations. She is also a member of “The Mystery Hour”, a regional Emmy-award winning talk show.

“Sarah’s been such an important part of our recent growth, and her experience and expertise has helped us evolve our thinking about projects, partnerships, and organization,” said Harris. He continued, “She’s had such an incredible impact in her time here, and we’re so excited to have her leading our creative team for the future.”