COVID-19 Has Caused A Delay In Review By Honorable Steve C. Jones 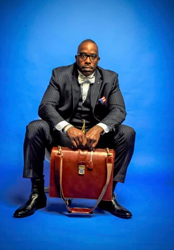 Foreign Companies have monopolized the U.S. plasma industry. Over 860 plasma donation centers in the U.S. supplies 90% of the world's plasma production. 80% of that 90% are from the descendants of those who were once human capital, and not one is "Black-owned."

On December 8, 2020, Furquan R. Stafford, the Owner, and CEO of C.P. Plasma Center, Inc. in College Park, Georgia, filed a 197-page monopoly complaint (Docket # 1:20-CV-4970-SCJ) about a Sherman Antitrust violation Act in the U.S. District Court, Northern District of Georgia. The complaint is against four of the world’s largest European based human blood plasma life-saving biotherapies companies and four of their U.S. subsidiaries, totaling eight separate entities. It’s been a 27 year journey that started in 1994, but recently the odds may be in Stafford’s favor.

The international companies are the Grifols of Spain, Kedrion SpA of Italy, CSL of Australia, and Octapharma of Switzerland. Without a plasma contract from these companies, C.P. Plasma Center, Inc., the world’s first African American owned blood plasma company, remains stifled.

This historical case responds to Stafford’s entering into a Non-Disclosure agreement with Kedrion in 2008. Instead of awarding a contract to C.P. Plasma, Kedrion opened a plasma center in the same area researched and submitted by Stafford’s detailed in the NDA. Stafford then pursued contracts with other Plasma companies. He was denied by each and discovered that each parent and subsidiary companies were both one entity with different business structures.

Endorsed by former United States Representative John Lewis (1940-2020). Stafford’s audacious complaint also cites the late 19th century Sen. Charles Sumner (1811-1874), who draws parallels between monopolies and slavery. It was Africans who were monopolized for their human capital. Today the United States supplies over 90% of the world’s plasma from 860 U.S. donation centers. 80% of that 90% are from the descendants of those who were once human capital, and not one is “black-owned.” The industry’s business model depends on there being plenty of socio-economic distressed people. These international companies rake in Billions annually is a gross disparity, says Stafford.

The only way Stafford sees to fix this is inclusion. Once called the Ghost of Dr. Charles R. Drew (1904-1950). Stafford points to the U.S. War Department Directive and American Red Cross 1941 policy of segregating blood plasma. The blood plasma industry for African Americans has gone from exclusion to segregation and is now a multi-billion dollar industry discovered by Dr. Charles R. Drew, an African American. This paradox also fuels his pursuit of equal economic growth. “There is no alternative for plasma, but huge amounts are needed for production to treat rare medical conditions. I saw a grave injustice for black plasma donors in the black community, and you know what, let me be the voice for the black community. If we’re good enough to donate plasma, then we should be good enough to be at the global leader's table.” http://www.thereslifeintheblood.com