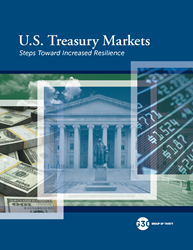 The Group of Thirty (G30) today published U.S. Treasury Markets: Steps Toward Increased Resilience. A product of the G30 Working Group on Treasury Market Liquidity, the report analyzes the weaknesses in the U.S. Treasury market during the market stress of March 2020 and sets out recommendations designed to improve functioning of this globally crucial market in future stress episodes.

The report provides insights into the reasons behind the extreme stress and failures. As market participants sought to liquidate treasuries in a “dash for cash,” U.S. Treasuries did not serve their traditional safe-haven role. Dysfunction in the Treasury market further exacerbated the crisis and highlighted a need to improve stability.

Timothy F. Geithner, Chair of the G30 Working Group on Treasury Market Liquidity, President of Warburg Pincus, and Former Secretary of the Treasury for the United States, noted: “The Treasury market is the most important financial market in the world and should have the highest standards for resilience, transparency, and oversight. Confidence in the U.S. Treasury market, and its ability to function efficiently even in times of stress, is critical to the stability of the global financial system.”

Mr. Geithner added: “We propose a series of ten reasonable and politically viable reforms to the Treasury market including guidance on liquidity facilities, central clearing, the regulation of market intermediaries, and market regulation and transparency. Taken as a whole, we believe our recommendations would make a meaningful contribution to improving the functioning of the Treasury market, both in normal times and in periods of crisis. We believe a Standing Repo Facility that is open to a broad range of market participants is especially important to improve market functioning and liquidity.”

Jeremy C. Stein, Project Advisor for the G30 Working Group on Treasury Market Liquidity, Former Member of the Federal Reserve Board of Governors, and Moise Y. Safra Professor of Economics at Harvard University, stated: “A Federal Reserve Standing Repo Facility should be made as broadly accessible as is practical. This will help to ensure that the liquidity provided by the Fed gets to where it is most needed in the financial system, which in turn should mitigate the pressure on those who would otherwise be forced to sell Treasuries to raise cash if they are unable to obtain financing for them.”

Professor Stein turned to the effect of banking capital regulation on the Treasury market, noting: “Robust capital requirements are an absolutely critical part of the post-Global Financial Crisis regulatory landscape. However, the leverage ratio has become—contrary to original intent—the de facto binding standard for many banking firms. This has the counterproductive effect of driving them away from low-risk activities such as making markets in Treasuries and providing repo financing against Treasury securities. The capital regime should be adapted so that the leverage ratio no longer is binding or near binding, while at the same time taking steps to ensure that the overall level of capital in the system does not decline.”

Darrell Duffie, Project Advisor for the G30 Working Group on Treasury Market Liquidity and Adams Distinguished Professor of Management and Professor of Finance at Stanford Graduate School of Business, supports all of the recommendations in the report. Regarding the costs and benefits of central clearing in the Treasury market, he stated: “All trades of Treasury securities and Treasury repos executed on electronic interdealer trading platforms that offer anonymous trading should be centrally cleared in order to increase market transparency, reduce counterparty risk, and lower settlement failures. Further, regulators should conduct a cost-benefit analysis of a much broader central clearing mandate for Treasuries trading, with a view toward increasing the intermediation capacity of the market by encouraging all-to-all trade.”

Professor Duffie elaborated: “The rapidly growing size of the Treasury market is outstripping the intermediation capacity of the market under stressed conditions. Central clearing would mitigate this problem. I also strongly support the recommendation of the G30 report for a thorough and independent review of the design and operation of the FICC.”

Patrick Parkinson, Project Director for the G30 Working Group on Treasury Market Liquidity, Former Director of the Division of Banking Supervision and Regulation at the U.S. Federal Reserve, and Senior Fellow at the Bank Policy Institute, observed: "A central goal of these recommendations is to increase, diversify, and stabilize market-making capacity in the Treasury markets. The willingness and capacity of firms to make markets is critically dependent on confidence in their ability to fund their holdings of Treasury securities, even during periods of stress. Thus, a key recommendation is that access to repo financing from the Federal Reserve be widened substantially beyond the small group of primary dealers to include other market-makers. Other recommendations that support the same goal include central clearing of all Treasury repos and enhanced Treasury market transparency."

The G30 thanks Project Director Patrick Parkinson for his extensive contribution to the report and Project Advisors Darrell Duffie and Jeremy Stein for their support. In addition, we thank the numerous individuals from the industry who were consulted in the research process for this report.

On July 28, 2021, at 9:00am EDT, the G30 hosted a live webinar launch of the report with Timothy Geithner, Darrell Duffie, Jeremy Stein, and Patrick Parkinson. A link to the webinar recording is available on the G30 website, http://www.group30.org.

The Group of Thirty is an independent global body comprised of economic and financial leaders from the public and private sectors and academia. It aims to deepen understanding of global economic and financial issues, to explore the international repercussions of decisions taken in the public and private sectors, and to examine the choices available to policymakers and market practitioners. The Group was established in 1978, and is led by Jacob A. Frenkel, Chairman of the Board of Trustees, and Tharman Shanmugaratnam, Chairman of the Group. More information and membership bios are available at http://www.group30.org.