Gaithersburg Residents Fight Plans for Industrial Crematorium Within Their Community

Citizens of Gaithersburg, Maryland have organized to oppose an application now pending before the City Council for an industrial crematorium to be built in a residential community – despite the plan violating established zoning laws. Grassroots campaign East Gaithersburg United speaks for many residents now pushing back with hopes that City Council members will reject the shocking plan on October 5th. 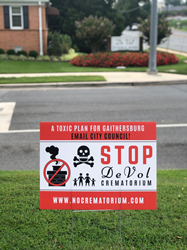 The whole community is extremely upset that the City Council might consider approving this plan – it does nothing to better the community – but instead, hurts its residents for the benefit of a private company.

Citizens of Gaithersburg, Maryland have rallied together to express concerns and voice their disapproval of plans submitted for City Council approval to build an industrial crematorium within the heart of the town’s quaint residential area.

In response, residents have formed East Gaithersburg United – a grassroots campaign dedicated to spreading awareness around the proposal and actively encouraging City residents to reach out to City Council members and urge them to deny the application.

Fearing harmful toxins, air pollution, increased traffic and the negative impact on property values posed by DeVol’s proposed crematorium, the residents have launched a website – http://www.nocrematorium.com – and are posting flyers and yard signs to raise awareness of this issue in their community.

“DeVol Funeral Home is playing fast and loose with its neighbors by trying to rush an incomplete proposal for a crematorium right next to apartments, family homes, schools and parks,” said Rob Bindeman, a longtime local affordable housing provider to hundreds of nearby families. “The whole community is extremely upset that the City Council might consider approving this plan – it does nothing to better the community – but instead, hurts its residents for the benefit of a private company.”

The negative impacts on the quality of life and property values are not the only causes for concern. Zoning attorney Michele Rosenfeld, Esq. has conducted an in-depth analysis of DeVol’s proposal and found it to be in violation of the City’s zoning laws, concluding that a funeral home cannot conduct cremations.

“A funeral home cannot carry out the final disposition of a human body. Maryland law unequivocally defines cremation, like burials, as the act of final disposition,” stated Rosenfeld. “The Council should deny this application for the simple reason that it fundamentally violates City law. Candidly, the application should be withdrawn and never even get to a Council vote.”

East Gaithersburg United is encouraging all Gaithersburg residents to reach out to City Council members and ask that they vote against the crematorium proposal.

A "No Crematorium" banner hangs from the Montgomery Park Apartments building across the street from DeVol Funeral Home's proposed site.