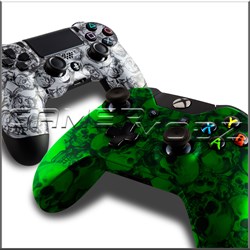 We work hard to build quality controllers that people love and it's very gratifying to get recognized by a company of their status.

The Holidays are here and finding the perfect gift can be a challenge. MTV offers fun suggestions for the Gamers in your life with their Gaming Gift Guide. GamerModz Custom Modded Controllers makes the list as a great gift idea with a personal touch.

"Our team is really excited that MTV chose to feature us on their gift list. We work hard to build quality controllers that people love and it's very gratifying to get recognized by a company of their status", says GamerModz President Shawn Best.

MTV posted the gift guide on their website as well as their Twitter account earlier in the week. They suggested GamerModz Modded Controllers as a great personal gift that any gamer would love and enjoy. With a vast array of color selections and finishes including glossy, matte, chrome, clear and hydro-dipped patterns your creation can be truly unique. The GamerModz Create-A-Controller allows you to personalize each part of the controller. There are also hundreds of previously created combinations including sports themed controllers, chrome controllers and even Zombie themed controllers.

GamerModz offers custom controllers for the brand new Xbox One and PS4 as well as Xbox 360 and PS3. Rapid Fire is available for all 4 controllers, so if you have a serious gamer you're shopping for, consider adding Rapid-Fire to their controller for enhanced game play.

About GamerModz®
GamerModz is a Tampa, Florida based company that designs and manufactures Custom Controllers for the Xbox and PlayStation gaming consoles. In addition to manufacturing user designed fully customized controllers, GamerModz also manufactures individual custom controller parts and rapid fire mods for gamers. The innovative rapid fire technology allows gamers to set the rate at which their weapon fires in many popular first person shooter games such as the Call of Duty and Battlefield series. More information about GamerModz and their products can be found at http://www.GamerModz.com or by calling (866) 205-5268.