With Xbox One hitting the shelves, GamerModz® is already selling Custom Modded Controllers and Rapid Fire Controllers for the Xbox One. 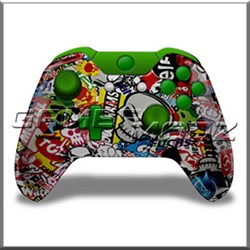 The trend of mobile sales continues to grow making it essential for us to have a fast-loading, easy to navigate site for mobile devices.

Hopeful gamers that pre-ordered the Xbox One are anxiously awaiting its arrival this weekend. Luckily for those wanting a Custom Controller to go with it, GamerModz® has already made their Xbox One Create-A-Controller™ live. In addition to custom shells and parts, Rapid Fire Mods are now available for the Xbox One Controller.

With the Holiday Season in full swing, GamerModz® won't be missing out on any sales this year. A new GamerModz mobile site launched offering the easy to use Create-A-Controller for Xbox One, Xbox 360, PS3 and PS4. Users can create designs for purchase, save them for later or just create for fun.

"The trend of mobile sales continues to grow making it essential for us to have a fast-loading, easy to navigate site for mobile devices," says GamerModz President Shawn Best. Gift Cards are also available on the site, offering parents an easy choice to let their kids create their own custom controller.

GamerModz® is proud to offer Rapid Fire for the Xbox One before any of their main competitors. Their in-house engineers quickly developed Rapid Fire Mods SPS X-1, SPS X-2 and SPS X-3 for the Xbox One Controller. Investing in technology and their engineering department has created a standard of quality unrivaled in the industry.

Despite the new systems release, Xbox 360 Modded Controllers are still a huge seller for GamerModz and will continue to be on the site for purchase.

About GamerModz®
GamerModz is a Tampa, Florida based company that designs and manufactures Custom Controllers for the Xbox and PlayStation gaming consoles. In addition to manufacturing user designed fully customized controllers, GamerModz also manufactures individual custom controller parts and rapid fire mods for gamers. The innovative rapid fire technology allows gamers to set the rate at which their weapon fires in many popular first person shooter games such as the Call of Duty and Battlefield series. More information about GamerModz and their products can be found at http://www.GamerModz.com or by calling (866) 205-5268.