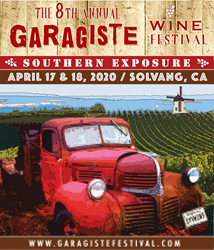 We love Solvang. It was the first place that proved our festival had appeal well beyond our home base of Paso Robles

The Garagiste Wine Festival, which was named ‘Best of the Fests’ for 2019 by Fest Forums, continues the celebration of its 10th anniversary year with three days of wine events during its popular Garagiste Festival: Southern Exposure in Solvang April 17th – 19th, 2020.

The Garagiste Festival, which premiered in Paso Robles in 2011, and is the nation’s first and only festival to showcase the wines of micro-production commercial ‘garagiste*’ winemakers, expanded to the Santa Ynez Valley in 2013 to highlight the wines of Santa Barbara County and surrounding AVAs, as well as small production wineries from across California. It has been a huge success and consistent sell-out ever since. Held at Solvang’s Mission-style Veterans’ Memorial Hall, Southern Exposure features a wide diversity of grape varieties vinified into over 150 different wines and unique blends, offering wine lovers one-of-a-kind opportunities to taste a range of the year’s most exciting handcrafted small-lot production wines, all under one roof.

“We love Solvang. It was the first place that proved our festival had appeal well beyond our home base of Paso Robles,” said Garagiste Festival Co-founder Douglas Minnick. “We have enjoyed showcasing the remarkable wineries of this area over the years and have been proud to watch as many of those tiny wineries have grown and thrived. Our fans love discovering the new ‘crop’ of exciting micro-wineries that pour each year, representing the depth and richness of the American Garagiste movement. Who knows, one of them may be the next Au Bon Climat!”

As part of the celebration of its 10th anniversary, The Garagiste Festival is offering the second in its “Original Garagistes” tasting seminar series, which celebrate the pioneers whose handcrafted, small lot wines laid the foundation for the worldwide reputation of the Central Coast. The “Original Garagistes: A Deep Dive & Tasting with Jim Clendenen” seminar features the "Mind Behind" Au Bon Climat. Clendenen, who is recognized worldwide, has received international awards for his classically styled wines at famed Au Bon Climat, which he helped start in 1982. This seminar will not only give attendees the opportunity to sample a selection of Clendenen's wines, but will also chronicle, via moderator Stewart McLennan, his unique story and winemaking journey. McLennan, who co-founded The Garagiste Festival, hosts The Garagiste Show on KRUSH FM.

“Jim was integral to proving that California’s Central Coast can produce world class Burgundian style wines. He has helped Au Bon Climat cultivate an international reputation for its Pinot Noir, Chardonnay, Pinot Blanc and Pinot Gris,” said McLennan. “And, with his passion project, Clendenen Family Vineyards, he is also crafting artisan, small lots of wine from a wider spectrum of varieties, including Italians and his highly acclaimed Nebbiolo. His is a true ‘original garagiste’ story, and we are excited to share it, along with his wines, in Solvang.”

The Original Garagiste seminar is available as part of the Festival’s Weekend Pass or Saturday VIP seminar and tasting package, which also includes a Wine Country Box Lunch from local favorite Succulent Café and early access to the Grand Tasting.

The Garagiste Festival: Southern Exposure kicks off on Friday, April 17th with "No Repeats, Rare & Reserve" BBQ, 6:30-9:00pm, where winemakers will pour extremely limited Club Only, Library and Pre-Release bottles that showcase what micro-production winemaking is all about, accompanied by a BBQ buffet from Neighbor Tim's BBQ.

Among the 40+ winemakers scheduled to pour at the Solvang Southern Exposure Garagiste Festival are:

2020 Garagiste Festival Dates and Places:
The Garagiste Festival’s 10-year anniversary celebration will continue throughout the year with special events, signature tastings, local chefs, after parties, and rare and reserve nights.

Tickets are limited for the Solvang festival and Garagiste Festivals always sell out. To buy tickets, go to: https://nightout.com/events/garagiste-festival-southern-exposure/tickets

In addition to being named the US’ Best Wine Festival, the Garagiste Festival was named one of the ‘Top Nine Incredible Epicurean Vacations’ in the world by ABC News, * “one of the premier wine events of the year,” by the LA Times and “Best Festival” by Sunset Magazine’s ‘Best of the West.’ The festivals are produced by Garagiste Events, a non-profit dedicated to furthering the education of future winemakers and those training for employment within the wine industry. Proceeds from the festivals support the Garagiste Festival Scholarship fund of the California Polytechnic State University at San Luis Obispo Wine and Viticulture Department.

*Garagiste (garage-east) is a term originally used in the Bordeaux region of France to denigrate renegade small-lot wine makers, sometimes working in their "garages" (anything considered not a chateau), who refused to follow the “rules,” and is now a full-fledged movement responsible for making some of the best wine in the world. The Garagiste Festivals were the first to shine a light on the American garagiste winemaker in 2011.