Garnet Hall’s new book “Spirits of Ephesus” is an exciting story following a privileged man as he follows his heart in a journey of love, lies, and memorable experiences

Recent release “Spirits of Ephesus” from Page Publishing author Garnet Hall is an exciting tale of adventure, friendship, joy and coming to terms with life-changing truths that could lead to betrayal. 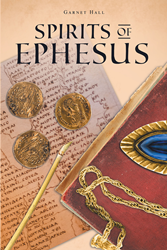 Garnet Hall, a Virginia native and a graduate of Liberty University has completed his new book “Spirits of Ephesus”: a riveting and powerful journey of a man and the woman of his affection during the middle of the first century and the link that brings the past to the present time.

Garnet writes, “Ephesus, in the middle first century, was a burgeoning Roman capitol, full of promise for the future. Its native son, Spyros, would be part of that future, having been born into a wealthy family of merchants and given the finest education possible. His would be a life of accomplishment and eventual fame.

"Then one day, by happenstance, he came to the aid of a beautiful girl, Zara, whose family and background was decidedly non-Roman. Some in the city called them barbarians, but after meeting her, he was not so sure anymore.

"Come! Join our privileged youth as he travels the seas, visiting some of the most famous cities in the Roman world, pursuing his love to the ancient and storied place of her birth. Along the way, he will befriend an unforgettable cast of characters.

"Adventure, friendship, joy, and life-changing truth await him as do the dark undertones of treachery and betrayal. Troubles are on the horizon for her and her family. They make a plan to get away. Will it succeed?

"Fast forward twenty centuries to the present, where an archaeological dig is taking place in the long-deserted city. We join a team of volunteers as they excavate Spyros’s former abode. Joel, their leader, dreams, as every archaeologist does, of making a significant discovery. While in negotiations with a local contractor, he is distracted by a tug on his sleeve. He turns. His youngest worker utters three words that change everything.

Published by Page Publishing, Garnet Hall’s enticing tale brings truth to the forefront of the story, with dark undertones of treachery and betrayal.

Trouble seems to follow the young couple as they investigate the seas and the land of the Roman world, family treachery is brewing and the plans of getting away seem to be becoming more complicated.

Readers who wish to experience this gripping work can purchase “Spirits of Ephesus” at bookstores everywhere, or online at the Apple iTunes Store, Amazon, Google Play, or Barnes and Noble.