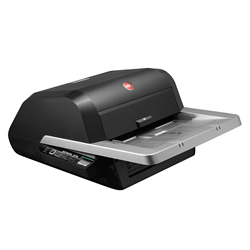 Less than four months after its debut GBC’s Foton 30, the first affordable, fully automated desktop laminator, has earned three major industry recognitions, including the biggest award in the industry, the People’s Choice Award from NAOPA.

Less than four months after its debut GBC’s Foton 30, the first affordable, fully automated desktop laminator, has earned three major industry recognitions, including the biggest award in the industry, the People’s Choice Award from the North American Office Products Awards (NAOPA). The revolutionary, easy-to-use Foton 30 automatically does all the feeding, laminating and trimming for standard size papers, saving 98% of time compared to manual pouch loading and feeding.

NAOPA recognizes the very best vendor and dealers operating in North America. The Foton 30 was nominated for both the Product Innovation of the Year and the People’s Choice category, which is awarded based on a vote by the general public. This is the third year in a row that ACCO Brands, GBC’s parent company, has won the People’s Choice Award. Previously ACCO Brands won for the GBC® Stack-and-Shred Auto Feed Shredders™, SmarTech Enabled and the Quartet® Desktop Glass Computer Pads.

“Being recognized with a NAOPA award, one of the most prestigious awards in our industry, is a testament to the true innovation GBC is driving with new product innovations such as Foton 30,” said Daniel Charwath, ACCO Brands Product Marketing Manager. “The People’s Choice Award specifically validates our belief that this highly innovative product speaks to consumer pain points and echoes the great reception we have seen in the market over the first few months since launch.”

The Foton 30 also earned the top spot from BindRite, a dealer group that selects just one product for its “Innovative Product of the Year Award.” Additionally, Foton 30 was selected as an Editor’s Choice from Kingswood Media and was featured in a recent issue of Business Info Magazine.

The Foton 30 is available on GBC.com, Amazon, and through select office dealers.

About GBC
The GBC (General Binding Corporation) story began in 1947 when founder, William N. Lane, and two business partners helped Chicago printers find a faster, more reliable way to bind and laminate. GBC introduced the first electric, desktop mechanical binding punch in 1961 then the tabletop laminator in 1966. After merging with ACCO Brands in 2005, GBC became part of the world’s largest supplier of branded office products. We make solutions for the place your business is today—and more importantly, where it’s going tomorrow.

About ACCO Brands Corporation
ACCO Brands Corporation (NYSE: ACCO) is one of the world's largest designers, marketers and manufacturers of branded academic, consumer and business products. Our widely recognized brands include Artline®, AT-A-GLANCE®, Barrilito®, Derwent®, Esselte®, Five Star®, Foroni, GBC®, Hilroy®, Kensington®, Leitz®, Mead®, Quartet®, Rapid®, Rexel®, Swingline®, Tilibra®, Wilson Jones® and many others. Our products are sold in more than 100 countries around the world. More information about ACCO Brands, the Home of Great Brands Built by Great People, can be found at http://www.accobrands.com.