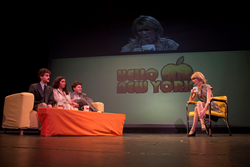 Glendale Community College has received five ariZoni (“Zoni”) Theatre Awards of Excellence nominations. Four of the awards center on the school’s production of “Based on a Totally True Story,” a fast-paced contemporary comedy set in New York and written by Roberto Aguirre-Sacasa.

Presented by GCC in February, the production was nominated in the category of “Best Overall Production for a Non-contracted Play.” (“Contracted” is the professional division.) It also garnered nominations for three GCC students: Best Actor in a Leading Role (Josh Larsen), Best Actress in a Supporting Role (Danielle Donaldson) and Best Director (Layne Racowsky). Racowsky will be an adjunct faculty in the Theatre & Film Arts this coming year.

Another GCC student, Bailey Hall, was nominated for Best Actress in a Supporting Role for her performance in The Heidi Chronicles, directed by David Seitz, GCC Theatre & Film Arts program director.

Winners will be announced on September 15 at the 23rd annual ariZoni awards ceremony to be held at the Tempe Center for the Arts.