Optical illusions on high-quality tee shirts have proven to be popular; fans range from kids to adults. Wearers like to get wild with optical illusion tees. 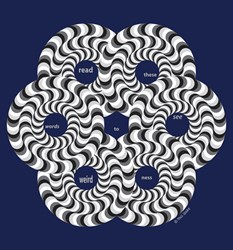 It's an odd fact that not everyone is able to see optical illusions.

It's an odd fact that not everyone is able to see all optical illusions. But anyone who can see them enjoys the head-spinning surprise of an optical illusion t-shirt. They're unusual, so they command attention, and it's not often that a t-shirt appears to spin, move, or sparkle.

The sense of motion is part of the surprise, and it's a surprise being served up by the viewer's own brain.

According to Tees For Your Head designer Tom Bates, "Illusions of motion are particularly striking, and some of them are likely tied to our brain's evolved assumption of a single light source (the sun). When the implied shadowing in an illusion is inconsistent with this assumption of a single light source, the brain can try to resolve its confusion by introducing the illusion of motion, since shadows on moving things do change."

The new designs Bates created include optical illusion t-shirt Turning In Place, which Bates had to build carefully. "Illusions are fragile. Subtle color changes can create or destroy an illusion, as can proportions of colors. I have to experiment, sometimes for many hours, to find the right balance to create what looks like a simple effect." The words included in the tee's design have a function: if the viewer looks directly at the shapes, they'll refuse to move. But when viewed peripherally, the shapes will begin to turn. By letting the eye follow the words, the wavy stripes move.

The Phantom Triangles illusion t-shirt is surprisingly effective, and one that should be easy for nearly all to see. In it, the illusion of colored triangles are created with mere sections of curved lines. The brain anticipates what it assumes is a missing shape, and helpfully (or not) provides the colored triangle. These are called transparent overlays, and the brain uses them all the time.

For example, when viewing a wall that appears to be one color but it passes under both light and shade, the brain uses transparent overlays to indicate that the wall is all the same color. A photometer would disagree. Since the wall appears the same in both light and shade, it must be two different colors, but the brain takes a shortcut that takes the viewer down the wrong path. Thus an illusion is born.

For the Strange Tree optical illusion t-shirt, the blue glow along the trunk and branches are another instance of a transparent overlay created by the brain to join the blue line segments crossing through the middle of the trunk, the same phenomenon as with the phantom triangles.

The Can't See Straight illusion t-shirt will have people whipping out a ruler, or reaching for a handy piece of paper, to prove that the lines are indeed curving. Indeed, they are not. In a simplistic sense, the eye cannot be trusted. In another sense, however, it is amazing the lengths the visual system can and will go to to create consistency with its assumptions about the world. The system is creating curves by trying to reconcile the lines forming the squares with the small, seemingly inconsequential marks in the individual squares.

As Bates commented, "These shirts are a lot of fun to wear. I wore one to the grocery store here in Santa Cruz and noticed that the checker had stopped ringing me up and instead was staring at my shirt. He said my Hermann Grid t-shirt was freaking him out."

Inside an illusion t-shirt: it's where the wild things are.

About Tees For Your Head

The online home of geeky t-shirts for lovers of the arts and sciences was launched in 2012. Husband and wife team Tom Bates and Karin Carter have an arts and science background and create their own designs to appeal to the geeks of the world. Santa Cruz tee shirt designs are in the works for this Santa Cruz-based business.

By the way, Tees For Your Head shirts are worn on the body, not really on the head. Just a helpful hint.

Find their unique and nutty tees at http://www.teesforyourhead.com online now. Visit the Tees For Your Head YouTube channel, too to check out their growing collection of videos. Be sure to join the conversation by leaving feedback, because Tees For Your Head would love to hear what people think.

Optical Illusion T-Shirt "Can't See Straight"Seen from straight on, this one really is deceptive.Those lines look like they can't possibly be straight...but they are.

Optical Illusion T-Shirt "Hermann Grid Illusion Tee"Elusive dots appear and disappear at the intersections of the lines in this illusion. Keep the eyes moving to keep the dots bouncing.

Optical Illusion T-Shirt "Strange Tree"The glowing blue trunk is an illusion: the brain is filling in the blue shape based on line segments, as in the phantom triangle illusion t-shirt.