A genomic error that causes Rett Syndrome, a serious lifelong neurological disorder, can be corrected in the brains of mice by rewriting the genetic instructions carried by the RNA.The new research, published July 14 in the journal Cell Reports, shows that RNA editing may repair the underlying cause of Rett Syndrome in a mouse model. The technology recoded enough RNA to restore half of the normal protein in three different kinds of neurons in the Rett mouse. Source: Rett Syndrome Research Trust 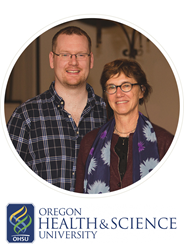 The study is the first example of RNA editing in a mouse model of a neurological disease, and therefore a considerable step forward in the potential of RNA editing becoming a therapeutic for Rett Syndrome,” Monica Coenraads, Rett Syndrome Research Trust

A genomic error that causes Rett Syndrome, a serious lifelong neurological disorder, can be corrected in the brains of mice by rewriting the genetic instructions carried by the RNA.

The new research, published July 14 in the journal Cell Reports, shows that RNA editing may repair the underlying cause of Rett Syndrome in a mouse model. The technology recoded enough RNA to restore half of the normal protein in three different kinds of neurons in the Rett mouse.

The results represent a promising early step in using RNA editing to treat Rett Syndrome, a disorder that affects about 350,000 individuals worldwide. The authors in the neuroscience lab of Gail Mandel at the Vollum Institute at Oregon Health and Science University (OHSU) in Portland, caution however, that much work lies ahead to advance the potential therapeutic to the clinic.

“This was a proof of principle” that the technique works in the brain, says lead author John Sinnamon.

People diagnosed with Rett Syndrome have mutations in a gene called MECP2. The gene makes a protein that is abundant in brain cells and controls the activity of many other genes.

Disease symptoms usually appear between 12 and 18 months of age and can include loss of speech and purposeful hand use, respiratory problems, motor deficits, seizures, and gastrointestinal and orthopedic issues. No cure exists, but studies in mice suggest restoring healthy MeCP2 protein function can dramatically reverse the condition.

Hundreds of different mutations in the MECP2 gene have been found in people with Rett Syndrome. The instructions for the protein it makes are coded in a unique combination of four genomic “letters” — A, C, G and T. The cell transcribes the DNA code into RNA and then into protein.

The idea behind the strategy used in this new study is to produce a healthy MeCP2 protein by repairing or “editing” the genetic error in the RNA.

The team used a mouse model of a human MECP2 mutation in which a single letter is wrong, an A where a G should be. They adapted an RNA editing technique by designing a guide to recognize the mutated section and change the A back to the normal G.

In 2017, Sinnamon, Mandel, and their colleagues reported their first success with the RNA approach, efficiently repairing the Rett mouse mutant RNA in developing neurons in a lab dish. In the new study, the team expanded on these results. They asked three questions: Is it possible to edit MeCP2 RNA in several different types of neurons in adult mice in vivo? If so, what types of neurons can be edited? Does editing restore MeCP2 protein function?

To address these questions, the researchers packaged a mouse Mecp2 RNA guide and human editing enzyme (the “editase”) in a viral vector and introduced it directly into the hippocampus, a well-studied brain structure associated with learning and memory.

The injected editase repaired about half of the RNA produced by the mutant MeCP2 gene in each of three types of neurons located in different regions of the hippocampus and, importantly, MeCP2 protein function was equally repaired in the neurons.

“It is encouraging that this RNA editing approach seems to be efficacious in different types of neurons in the brain,” says Mandel, the senior author whose lab has pioneered the concept of RNA editing in Rett Syndrome. A similar repair rate should be achievable throughout the brain, the researchers believe, if a vector can be delivered diffusely throughout the brain.

“In the next set of experiments,” Mandel says “we will administer the virus by blood, so that the entire brain is subject to editing. This will allow us to monitor whether there is any amelioration of Rett symptoms in the mice.”

As a strategy to restore the normal function of MECP2, the single-base RNA editing approach of swapping out A and G could address about 40% of all known mutations that cause Rett Syndrome, Sinnamon says.

The researchers reported that RNA of genes other than Mecp2 also were inadvertently edited, known as off-target effects. It is unknown what, if any, effect the off-target edits had in the mice. The experimental treatment appeared to cause no harm to the mice over the study time period.

As the RNA editing approach progresses through experimental steps, additional questions will need to be answered. “We need to know how much MECP2 RNA we need to repair in an individual cell and in how many cells in the nervous system,” Mandel says.

Her research group and others in the editing field also want to learn more about how to increase editing efficiency while diminishing off-target effects. “There are many bright and determined investigators working on these problems,” she says. “My hope is this paper will stimulate these creative minds even further. We are trying to take advantage of what’s happening in the field in real time and apply the emerging optimizations to Rett and other neurological diseases.

“The study is the first example of RNA editing in a mouse model of a neurological disease, and therefore a considerable step forward in the potential of RNA editing becoming a therapeutic for Rett Syndrome,” says Monica Coenraads, executive director of Rett Syndrome Research Trust, which helped fund the study. "Strategies that edit the mutation are an elegant way of addressing the problem. This exciting progress would not be possible without all of RSRT’s supporters and the affected families that are so dedicated to raising funds for us.”

RSRT funds six genetic approaches to restore a functioning MeCP2 protein in patients with disease causing mutations. Beyond RNA editing, other approaches are gene replacement, which is the closest to the clinic, gene editing, RNA trans-splicing, protein replacement and reactivation of the silent MeCP2 on the inactive X.

The study was funded by the Rett Syndrome Research Trust and the National Institutes of Health. Mandel is a scientific co-founder of Vico Therapeutics, a biotech company working on non-viral approaches to edit RNA in Rett syndrome and other neurological conditions.

About Rett Syndrome Research Trust
The Rett Syndrome Research Trust (RSRT) is a non-profit organization with a highly personal and urgent mission: a cure for Rett Syndrome and related MECP2 disorders. RSRT operates at the nexus of global scientific activity enabling advances in knowledge and driving innovative research. Since its founding in 2008, RSRT has awarded $66 million, all of it contributed by affected families and their networks, to leading scientists. To learn more, please visit http://www.reverserett.org.