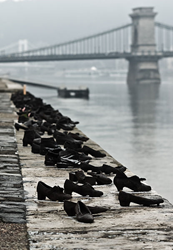 The Shoes on the Danube memorial in Budapest honors the Jews killed by Arrow Cross militiamen during World War II.

Jobbik... wants detention camps for Roma "deviants" and has argued that Jews are a "national security risk."

A series of recent conferences focused on Hungary’s role in the Holocaust—along with troubling political developments in that country—have underscored the urgency of Aleksandar Veljic’s hard-hitting Holocaust exposé, “Genocide Revealed.”

In early April, Hungary’s far-right Jobbik party made notable gains in the national election, securing 23 of the country’s 199 parliament seats. The UK's "Independent" reported the following in an online article on April 7:

“Jobbik, which wants detention camps for Roma ‘deviants’ and has argued that Jews are a ‘national security risk,’ had upped its share of support by five per cent and had secured 20.86 per cent of the vote in Sunday’s election.”

These results come on the heels of other disquieting recent developments in the country. In January, Hungary’s ambassador to the UN publicly apologized for Hungary’s role in the Holocaust. On January 25, "The Jerusalem Post" reported that the speech was triggered by an uproar over a state-sponsored historical research director, Sándor Szakály, terming the World War II deportation and massacre of tens of thousands of Ukrainian Jews a “police action against aliens.” It also followed word of the development of a controversial new Hungarian World War II monument. As reported by the "Wall Street Journal" on April 22, the monument’s construction has drawn daily protests and demonstrations from civil groups, who feel the statue characterizes the country as more of a passive victim than a wartime Nazi ally.

The attempts by some influential figures to de-emphasize Hungary’s role in the Holocaust is not lost on Veljic. In "Genocide Revealed," the author documents the long-hidden atrocities committed under the direction of regent Miklós Horthy in Hungarian-occupied Serbia. “Almost exactly 70 years ago, Horthy’s Hungarian occupation forces rounded up Jews from northern Serbia and escorted them to Nazi death camps. The number of victims during Horthy’s three-and-a-half year reign of terror in northern Serbia amounts to 100,000 Serbs and Jews. The brutality of those crimes, which I describe in my book, must never be forgotten.”

The 70th anniversary of Hungary’s role in the Holocaust was recently the focus of well-publicized conferences in both Hungary and the United States. The conference at Budapest’s Central European University, as noted on their website, focused on: “bringing together the top scholars in the field to share their research on the leadup to the atrocity, the responsible actors, the effects of the destruction, and the ways in which the Hungarian Holocaust is remembered and commemorated.”

These conferences, along with the publication of “Genocide Revealed,” aim to bring the facts of the Holocaust and the responsibility of those involved into the light of day so that history’s tragedies do not repeat themselves. “Congratulations to Aleksandar Veljic for his diligence and fortitude in having created an important work of original history,” said Wade Fransson, founder of Something or Other Publishing, which published Veljic’s book. “’Genocide Revealed’ is destined to be cited in every subsequent work on this and related subjects, of which we can be sure there will be many.”

About Something or Other Publishing:
Something or Other Publishing, LLC is a new concept in publishing that seeks to connect authors and readers like never before. Its democratized selection process and subsequent focus on author education, empowerment, and encouragement is designed to provide a platform for a new generation of talented writers. The company is based in Madison, Wisconsin.