‘The Frown of Fortune’ presents readers with action-packed thriller 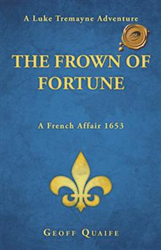 Skillfully written, highly imaginative, and equally entertaining, “The Frown of Fortune” is a historical fiction that reminds readers about the complicated world of politics and how criminal links have vastly changed over the centuries.

“The Frown of Fortune: A Luke Tremayne Adventure...A French Affair 1653” by Geoff Quaife (published by Trafford Publishing) follows a hit man who protects the interests of Lord General Oliver Cromwell against conspirators and criminals and excels in uncovering the many murderers that cross his path. In this riveting new novel, plans for him to be an agent at the Royalist court go astray and instead, he finds himself engrossed in the intrigues and murders surrounding a French aristocrat.

In 1653, Cromwell sent Luke Tremayne and his deputy Harry Lloyd to Paris to negotiate secretly with the exiled King Charles II. After a serious mishap to Luke, Harry is forced to complete the mission alone.

Luke is nevertheless gainfully employed by a wealthy French aristocrat, the Marquis des Anges, to investigate the murder of his first wife and the attempted murder of his second. Harry assists the English courtiers to solve the murder of two young ladies-in-waiting to the Queen Mother Henriette Marie and together with a Royalist peer is falsely imprisoned and tortured. He escapes and after many life-threatening adventures is rescued on the orders of France’s chief minister, Cardinal Mazarin.

Meanwhile, Luke’s investigations are complicated by a feisty abbess, hysterical nuns, a Canadian adventurer, a rampaging bear, and a mysterious treasure of English Catholic gold and silver—investigations that provoke a series of fatal bombings. Harry’s determination to find and exact revenge on a renegade French aristocrat responsible for his torture leads him eventually to the French chateau where Luke is pursuing his villains.

Skillfully written, highly imaginative, and equally entertaining, “The Frown of Fortune” is a historical fiction that reminds readers about the complicated world of politics and how criminal links have vastly changed over the centuries.

About the Author
Geoff Quaife was born in Melbourne, Australia, and spent his working life teaching history at the University of New England, Armidale, Australia. In retirement, he has enjoyed the freedom of writing historical fiction.