George Perris - "How Many Does It Take" - New Single

Greek-French vocal pop sensation George Perris releases “How Many Does it Take”, the first single from his highly-anticipated new international album “Who I’m Meant To Be”. 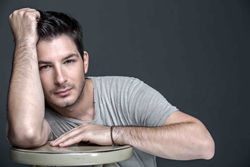 "His charm was infectious!" BroadwayWorld.com

Greek-French vocal pop sensation George Perris releases “How Many Does it Take”, the first single from his highly-anticipated new international album “Who I’m Meant To Be”.

The acclaimed Greek-French singer is returning to the USA with a new single and album, following a successful US and international tour as well as a PBS Special in 2016, “Live from Jazz at Lincoln Center”.

“How Many Does it Take”, co-written by George Perris, Eric Rosse (Sara Bareilles, Maroon5, Tori Amos, Idina Menzel) and Sasha Sloan (John Legend, Steve Aoki), touches a subject that is familiar to many families in the world: addiction. In particular, as seen from the eyes of someone watching a loved one suffering from alcoholism. The song’s melody and raw lyrics are perfectly entwined with Perris’ unique vocals. A powerful music video that symbolizes the entrapment addiction provokes has been released to accompany the release of the single.
Watch it here: http://www.tinyurl.com/howmanyvideo

Recorded in Los Angeles, New York, Montreal and Athens, Perris’ second English album “Who I’m meant to be” is the artist’s first attempt at co-writing an entire album and collaborating with producers and songwriters such as Eric Rosse, Sasha Sloan, Mikal Blue etc.

Later in the year, Perris’ 2nd Public Television Special, “Live at the Acropolis” will be aired on PBS stations across the USA. Filmed at the 2000-year-old Odeon of Herodes Atticus at the foot of the Acropolis, this new special featuring some of George’s new songs as well as some from his repertoire and with Australian superstar Tina Arena as his guest star promises to be an exciting new show!
Perris’ debut Public Television concert special was filmed live at a sold-out performance at the prestigious Jazz at Lincoln Center in New York City and was broadcast nationally on PBS reaching more than 50% of the country, 120 million viewers and more than 700 airings of the Special!

“How Many Does it take”

George Perris - How many does it take - single cover