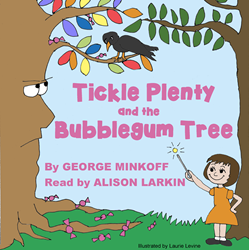 What a treat it has been to be given the task of finding just the right voice for a bear, a young giant, a little girl, words, bats, clouds, a magic wand, various wizards and a bubble gum tree, to name but a few of the many vivid, original characters populating the Tickle Plenty series!

The author, George Robert Minkoff, charms audiences with his children’s audiobook trilogy filled with humor, wit and revelations that children and adults will find rewarding. The series features Tickle Plenty, a little girl living in a fantastical house in the Rainbow Forest. Tickle’s never-ending curiosity, exceptional resourcefulness, and talent for word games and poetry contests carries her through a series of magical adventures. Tickle’s group of friends includes an energetic talking bird, an always hungry bear, a competitive best friend, a wise child giant and a talking magic wand with bad manners. These stories are filled with the kind of imagination seen in contemporary children’s books. Created for children aged 6-10, the series is read by award-winning narrator, Alison Larkin, and is available on Larkin’s website, http://www.alisonlarkinpresents.com.

Tickle Plenty was created during long-distance phone calls between Penelope, Minkoff’s granddaughter in California, and Minkoff, in Massachusetts. Minkoff began by reading stories and poetry to Penelope and finally, “I began to tell her stories about an imaginary little girl named Tickle Plenty, and how she lived in the Rainbow Forest with her mommy in a chocolate chip cookie house. Every time I finished a story she would enthusiastically ask for another. So, I went on making up stories, sometimes four or five a day. We had a lot of fun,” recalls Minkoff. The current trilogy is a compilation of several original tales organized into longer chronicles. “I have a list of tales yet to tell,” Minkoff joked.

The audiobook series begins with "Tickle Plenty and The Bubblegum Tree." The friends embark on a journey to save the only source of bubble gum in the Rainbow Forest. They row north in hot air balloons to the Ice Cream Volcano in an effort to bring peace between the angry crows and the Bubble Gum Tree. Beyond it all is the question: Is the Age of Magic really over?

Delightful and celebratory, "Tickle Plenty and the Lollipop Garden" finds the group on a birthday journey down the Lemonade River on a boat with wings. Along the way they befriend Talking Words, play baseball with floating marbles and assist the Shepherdess of the Lollipops whose garden is suffering from a magical ailment.

The third installment, "Tickle Plenty and the Kingdom of the Clouds," finds the friends traveling to the Nothing Happening Festival. After a poetry contest, the group is carried off during a storm by exceptionally light cotton candy to the Kingdom of the Clouds, where they meet the last of the evil Wizards. The friends have a revelation about the Age of Magic when they seek answers to the mysterious forest voices.

Alison Larkin says, “What a treat it has been to be given the task of finding just the right voice for a bear, a young giant, a little girl, words, bats, clouds, a magic wand, various wizards and a bubble gum tree, to name but a few of the many vivid, original characters populating the 'Tickle Plenty' series!”

A rare book dealer for fifty-two years, George Robert Minkoff is a member of the Antiquarian Booksellers’ Association of America, and the International League of Antiquarian Booksellers. Minkoff serves on the Board of Directors of the Poetry Society of America, currently serving as Secretary. George Robert Minkoff Inc. Rare Books is known internationally for the selling of manuscripts and letters of major American and English writers. Minkoff has written the "Bibliography of the Black Sun Press" and the "Bibliography of the Black Manikin Press," both standard references in the field. Additionally, George Robert Minkoff has authored the trilogy "In the Land of Whispers", a historical novel concerning the English in the New World. The three volumes are: "The Weight of Smoke," "The Dragons of the Storm," and "The Leaves of Fate."

Tickle Plenty and the Kingdom of the Clouds, by George Minkoff. Read by Alison Larkin. Illustrated by Laurie Levine.