George Robert Minkoff Launches a New World Epic, “In the Land of Whispers” Trilogy, as an Audiobook Series

Narrated by Shakespearean actor, Nigel Gore, “In the Land of Whispers” follows the journey of Captain John Smith. 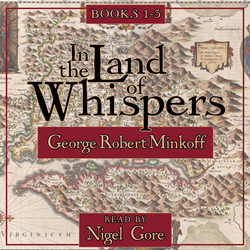 In The Land of Whispers, Books 1-3. Novel by George Robert Minkoff, read by Nigel Gore.

The three books show the development of the American character, with all its ambiguities – both its search for freedom and its toleration of a system of indentured servants that lead to slavery.

Four hundred years since the founding of the Jamestown Colony, George Robert Minkoff has re-released his acclaimed trilogy “In the Land of Whispers” in an audiobook trilogy series. All three sagas are available together on digital download: “The Weight of Smoke,” “The Dragons of the Storm,” and “The Leaves of Fate.” George Robert Minkoff is an accomplished writer, and Nigel Gore’s reading gives his language the dramatic lyricism of the English stage.

The three books comprising the trilogy “In the Land of Whispers” are historical novels about the founding of the first English colony in the New World at Jamestown, Virginia. They are not simply profoundly researched historical novels, they are visionary epics chronicling lesser-known aspects of the Elizabethan world, including the importance of alchemy to Queen Elizabeth and her court. The canvas is vast, intertwining the life of John Smith, as narrator, with that of Sir Francis Drake, the great Elizabethan explorer, whose feats thirty years beforehand inspired Queen Elizabeth and later King James, to dream of an English Empire. These novels depict the reality of the people who braved great unknowns – treacherous seas, new territory, indigenous populations – to bring with them a utopian ideal that was ultimately shattered on the altar of English custom.

The three novels comprising “In the Land of Whispers” are rich in their observations of human nature and the meaning of history, all within a fascinating story of an era filled with discovery and voyages into the unknown.

George Robert Minkoff says, “Nigel Gore brings alive the words of this trilogy and its description of the New World in such a way that listeners feel they are watching a movie or an epic play. The three books show the development of the American character, with all its ambiguities – both its search for freedom and its toleration of a system of indentured servants that lead to slavery.”

For the first time, the full “In the Land of Whispers” trilogy – “The Weight of Smoke,” “The Dragons of the Storm,” and “The Leaves of Fate” – are available for purchase as a single audiobook package here on Audible. For information regarding George Robert Minkoff, visit minkoffaudio.com. For press or review inquiries, contact Olga Gonzalez, Pietra Communications, at info@pietrapr.com, or call 212-913-9761.