A powerful book that reinforces the first volume—aimed at helping the Americans to understand the great invulnerable Nuclear Deterrent and the Doomsday Machines, which continue to deter a secular World War III and prevent a religious Armageddon. 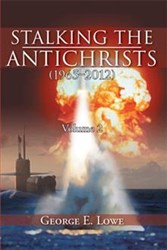 The first volume of this book was essentially an “enhanced” memoir—and a revisionist history—mostly based on author George E. Lowe’s personal observations, knowledge and “specialized information” from his extensive academic studies in History, Naval Air Intelligence & Foreign Service duty in Japan, Pentagon & Paris Embassy. Stalking the Antichrists: and Their False Nuclear Prophets, Nuclear Gladiators, and “Spirit Warriors (1965-2012) Volume 2 is the reinforcement of his revelations as a Revisionist Historian Lowe continues to dissect and reveal more of the truth about the “Antichrists” [The American Presidents] and the hostile, provocative stratagem created by their “defense intellectuals” and their political-military advisors on nuclear strategy –1945-2012 .

While the first volume has provided readers with awareness on the fission A-bombs,/fusion H-bombs, the two powerful memes, (“Deterrence” & “Containment” ) and the new and influential group of men who mastered the nuclear weapons and the related political-military doctrines, of the Nuclear Deterrence and Political Containment.

Stalking the Antichrists: and Their False Nuclear Prophets, Nuclear Gladiators, and “Spirit Warriors” (1965-2012) Volume 2 covers the end of the Lowe’s specific actions/activities in the Navy and Foreign Service in 1965. This book then continues to follow as Lowe, a Revisionist Historian, seeks to understand the evolution of the Doctrine of Deterrence and the related military deterrent weapon systems.—jet bombers[B-52s] and ballistic missiles.[Polaris and Minuteman] It also traces the development of the great \meme of Deterrence from the first two A-bombs (fission) dropped on Hiroshima and Nagasaki, the Soviets’ tests of their A-bomb[1949], and the Soviet and American fusion H-bombs tests of [1952—1954].

Both volumes one and two of Stalking the Antichrists are designed to inform the readers of the author’s “specialized information,” and “observation and knowledge” about Contemporary and America History, which spring from his living through World War II and the Cold War, supported by his extensive formal studies and “living in history.’’ Lowe hopes that these two volumes will help the American people understand the Great Invulnerable Nuclear Deterrents and the related Doomsday Machines which continue to deter a secular World War III and prevent a religious Armageddon.

About the Author
George E. Lowe was born in Scranton, Pa., in 1928 and educated in the public schools of New York, New Jersey, and Pennsylvania. He graduated with a Bachelor’s Degree from Grove City College and obtained a Master’s Degree from the University of Chicago. He taught at all levels of American education from 1950 to 1993. He served over thirty years in the Federal Government from 1953 to 1988, and was a US Naval Intelligence Officer based in Japan, Hawaii, and the Pentagon, a Foreign Service Officer for African Affairs and the Paris Embassy, and a Civil Servant (OE/ED). Lowe is the author of “The Age of Deterrence,” Little, Brown (1964), “It Can Happen Here: A Fascist Christian America,” Xlibris, two Vols. (2000), “Truth Seeking,” Xlibris (2006), “Birding and Mysticism,” Xlibris, two Vols. (2009) and many articles on military policy, nuclear weapons, education, and the environment. He was also a Speechwriter in Navy Department, 1961 and 1965 and in the Department of Education from 1981 to 1988. Lowe married in 1954, has two daughters and three Jack Russell Terriers. His hobbies are cooking/baking, book collecting, traveling, and birding. The author splits the year in Stuart, Fla., and Port Medway, Nova Scotia.