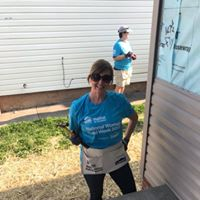 "We strongly support Habitat for Humanity and its Women Build Week by participating every year. ”- Gayle Gerling Pettinga

The program invites women to devote at least one day to help families build strength, stability, and independence through housing. The week is meant to spotlight the homeownership challenges faced by women. More than 98,000 women from all 50 states have volunteered at the nine previous National Women Build Week events.

On Thursday, August 23, Gerling Law staff will also be attending the Evansville Habitat for Humanity HabiTea at the Evansville Country Club. This is the third year the firm has sponsored a table at the event. HabiTea is the annual fundraiser for Habitat’s Women Build. HabiTea originated in Evansville as a fundraiser for the Women’s Build. Along with tea tastings, attendees will enjoy a delightful lunch, a testimonial from a Habitat future homeowner, a silent auction, and vendors.

For more information, to donate to the silent auction and/or to purchase tickets or table sponsorships, please contact Gail Knight Williams at (812) 423-5623 ext. 31.

About Gerling Law
For over five decades, Gerling Law has pursued justice and fair compensation for people who have been injured by someone’s actions or neglect, along with people who can no longer support themselves because of an illness or injury. Practice areas include personal injury, medical malpractice, and Social Security disability. Gerling Law has four locations: 519 Main Street, Evansville, IN 47708; 120 East Market Street, Suite 1271, Indianapolis, IN 46204; 4965 U.S. Highway 42, Suite 1000, Louisville, KY 40222; and 2645 Frederica Street, Suite 200-A, Owensboro, KY 42301. For more information, please call (888) 437-5464, or visit http://www.gerlinglaw.com.