The Company Will Arrange the Ride to Space with Falcon 9 for 30 SmallSats this December and Open an Office in U.S. 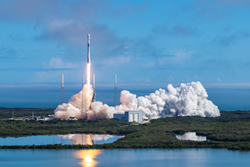 SpaceX program is a game-changer for the rideshare launch industry giving new impetus for numerous constellations of small satellites. Teaming up with SpaceX, we are able to offer our customers seamless, reliable, and cost-effective launch solutions and expand access to space.

Exolaunch, the leading rideshare launch and deployment services provider for the New Space industry, signed a long-term launch agreement with SpaceX to secure Falcon 9 capacity for launching small satellites as part of SpaceX’s SmallSat Rideshare Program. Under the agreement, Exolaunch manifests multiple microsatellites and cubesats on Falcon 9 rideshare missions to a sun-synchronous orbit throughout 2020 – 2021.

Exolaunch is accommodating 30 small satellites on the first SpaceX dedicated rideshare mission scheduled for launch this December, and is gearing up for its launch campaign next month at the SpaceX launch facility at Cape Canaveral, Florida. Additionally, Exolaunch is planning to open an office in the U.S. to provide more flexible launch and deployment services to its growing list of stateside customers.

“SpaceX program is a game-changer for the rideshare launch industry giving new impetus for numerous constellations of small satellites. Teaming up with SpaceX, we are able to offer our customers seamless, reliable, and cost-effective launch solutions and expand access to space,” said Jeanne Medvedeva, Vice President of Launch Services at Exolaunch. “Our first mission with Falcon 9 later this year will set the precedent for our rideshares going forward, and we are delighted to extend partnership with SpaceX.”

Exolaunch’s Program Manager, Connor Jonas, added, “As we continue to sign on more U.S.-based customers, it makes sense strategically for Exolaunch to establish an additional office in the U.S. At this new location, we will set up a team of rideshare launch and deployment service experts who will be perfectly equipped to serve our customers and prospects in the states now and downstream.”

For the December mission, Exolaunch will provide comprehensive rideshare mission management, deployment, and integration services for 30 satellites for its U.S. and European customers. Some of the core customers who signed up for launches through Exolaunch’s services include Loft Orbital, Swarm Technologies, NanoAvionics, German Aerospace Center (DLR), German universities and other commercial constellation customers.

On each Falcon 9 mission, Exolaunch will utilize its brand-new product, the EXOport, which is a flexible multi-port adapter designed to enable optimal accommodation of microsats and cubesats. The company will also utilize its proprietary flight-proven separation systems – CarboNIX the next generation shock-free separation system for microsatellites, upgraded modifications of EXOpod cubesat deployers and EXObox sequencers to flawlessly deploy its customers’ satellites into the target orbit.