A recent study by PsychTests.com reveals that women are much more open to paranormal phenomena, especially supernatural beings, superstitions, and urban legends. 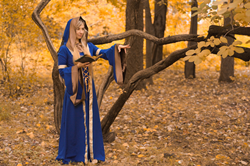 Women are not afraid to pull open the paranormal veil.

Women tend to be more introspective, better at picking up on vibes, and are more in tune with both their feelings and their proverbial six sense, hence the term ‘woman’s intuition’.

The paranormal has been both revered and feared, respected and mocked. However, its impact on history and humanity is undeniable - the witch trials are a testament to this. The number of people tried and executed for witchcraft in 14th to 18th century Europe ranges in the tens of thousands, although some historians feel this amount is vastly underestimated. However, even though fear of the paranormal has diminished, its allure has not, and this fascination with all things supernatural is particularly pronounced in women, according to a study conducted by PsychTests.com.

Analyzing data from 2,172 people who took the Paranormal Beliefs Test, researchers at PsychTests looked at gender differences in the perception of the paranormal. With the exception of a few beliefs, women were shown to be much more open-minded about the occult, mysticism, and magic. Here’s where men and women differed (the percentages shown indicate strong believers in the particular phenomenon):

“It’s not surprising to see that woman are much more open to the paranormal than men. Women tend to be more introspective, better at picking up on vibes, and are more in tune with both their feelings and their proverbial six sense, hence the term ‘woman’s intuition,’” explains Dr. Jerabek, president of PsychTests. “Historically, women have always been inextricably connected with the paranormal, for better - as healers, guides - and for worse - as frequent targets of witch hunts.”

“Men tend to lean more toward phenomena that can be measured or observed scientifically,” continues Dr. Jerabek. “Even if images of Yetis or UFOs are suggestively blurry, many still believe that it’s only a matter of time before proof is found. In contrast, women are more willing to stretch their mind beyond the seemingly impossible, to want to peek behind the veil of mystery, and to challenge the standard understanding of reality.”