Ida-Maria Carriero, a rising singer and dancer, was recently acknowledged for her fabulous talent and work ethic. 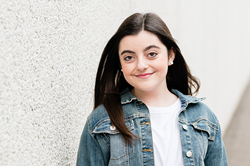 Today, Ida-Maria acts as a speaker and role model for those suffering with General Anxiety Disorder, using her experience and platform to influence others positively.

A singer since she was six, Ida-Maria also began dancing competitively at age seven. She currently dances competitively with Maple Academy of Dance in all genres.

Ida-Maria was diagnosed with General Anxiety Disorder at an early age. Today, she acts as a speaker and role model for those suffering with this disorder, using her experience and platform to influence others positively.

Ida-Maria is also a member of the rising pop supergroup Girl Pow-R, which was formed on International Women's Day in 2017.

The group has had a busy schedule since its inception. They have performed more than 200 shows in the last 2.75 years, and won the Family Channel singing competition, and were nominated for several other awards like the Niagara Music Awards' "Best New Group" and a Toronto Independent Music Award.

Ida-Maria has brought her talents to Girl Pow-R, including her stage presence honed through musical theatre which she started at the age of 7, with her first production being Peter Pan, where she played the lead role of Peter Pan. She is also studying and playing RCM piano since the age of 7, which she plays as part of the Girl Pow-R band.

Some other highlights include Ida-Maria participating in a Tiny Talent Time Show with a Musical Theatre piece "Born To Entertain", she starred in the TVO Kids show "It's My Party" Carnevale, and was cast as the Voice Over character for Rose Red in the Audio Book - Another Snow White.

Her band Girl Pow-R will also be performing at Luv2Dance Compeition in both the regional and national finals in Canada. This band is original because each girl supports a social cause that is dear to them and they are very involved in the community. This past summer the band went on their first tour in the US to Washington DC, Philadelphia, New York and Boston.

Ida-Maria's dream is to perform on the big stage in Broadway or around the world!