Arielle, a member of the pop group Girl Pow-R, performed recently as the front act for Angeline Quinto & K Brosas. 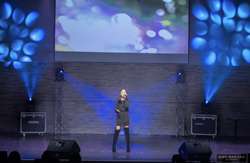 Arielle at the Toronto Pavilion

Both songs highlight Arielle's belief in the virtues of hope and trusting in one's dreams.

Arielle, a member of Girl Pow-R, and a rising star with skills in dance, piano, and singing, recently performed at the Toronto Pavilion.

Arielle was the front act for Angeline Quinto and K Brosas, two of the Philippines' most prominent musical celebrities, performing for hundreds of people who were in attendance.

She performed two cover songs: Girl on Fire by Alicia Keys, and A Million Dreams from The Greatest Showman. Both songs highlight Arielle's belief in the virtues of hope and trusting in one's dreams.

Arielle is also part of the pop supergroup Girl Pow-R, which creates and performs original songs to inspire young people.

Girl Pow-R is an all-girl pop rock band with girls ages 11 to 17 years old. They create & sing original music, cover songs, play instruments as a band, as well as dance. Girl Pow-R was formed in 2017 on International Women's Day. Since then, the group has gone on to perform more than 200 shows in the last 2.75 years, and have won various awards and competitions.

The Girl Pow-R group supports, through its individual members, supports social causes such as education for girls, youth homelessness, and health advocacy. The pop group is represented by Canyon Entertainment Group, an Ontario-based artist management company and independent record label.