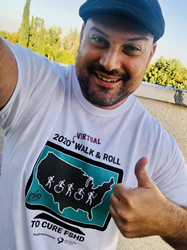 “I watched my Mom and Grandma struggle with this disease, and I don’t want that to happen to anyone, anywhere, ever again,” Max Adler said.

The FSHD Society, a 501c3 nonprofit patient advocacy organization, announced today that Max Adler, an actor best known for his roles on the hit series “Glee,” available for streaming on Netflix, and “Switched at Birth”, is serving as this year’s national ambassador for the organization’s signature fundraiser, Walk & Roll to Cure FSHD, taking place September 12. There are currently no treatments available to people with FSHD and with Max Adler’s help the FSHD Society is hoping to raise $500,000 to be put towards research and drug development with the goal of having an approved therapy by 2025.

While Covid-19 forced the FSHD Society to shift their annual Walk & Roll to a virtual format, Adler enthusiastically accepted the challenge of raising awareness and funds despite difficult landscape because of his personal connection to FSHD, one of the most prevalent forms of Muscular Dystrophy. FSHD attacks the muscles in many parts of the body, often affecting people’s ability to smile, lift objects, and walk.

“I watched my Mom and Grandma struggle with this disease, and I don’t want that to happen to anyone, anywhere, ever again,” said Adler. “My grandmother, for example, had a motorized scooter attached to the back of her car, and every time she parked, I remember having to assist her with being able to get out of the driver’s seat, which was no easy task, and helping her walk ever so slowly to the back of the car to get the scooter, holding onto the car so she wouldn’t fall. The hot, hot, burning car in the Arizona sun. It was agonizing to see.”

“My mother was also diagnosed with FSHD, as the disease can be passed genetically,” Adler explains. “Simple things like walking from her bedroom to the living room required a rolling stool for her to lean on because she could no longer walk upright. Other things that usually don't require much effort or thought such as grabbing a coffee mug from a shelf above your head became the most arduous challenges for her, bringing tears to her eyes, which of course then brought them to mine.”

“The money we're raising by participating in this Walk & Roll is supporting programs and funding research that will directly impact patients and their families living with FSHD," Adler said. "Every dollar raised brings us closer to a treatment…I hear it could be as soon as 2025.”

As national ambassador, Adler is inviting his fans to join him in fundraising for FSHD research or by raising awareness through posting to social media with #curefshd #nationalwalkroll. Walk & Roll participants will have an opportunity to win a special “Moment with Max.” Winners in each category below will be invited to a live Facebook event on September 12 to chat, one-on-one, with Adler.

Supporters across the U.S. (and beyond) can register for the FSHD Society National Virtual Walk & Roll by visiting FSHDSociety.org/walk-Roll. Supporters can also tune in on the FSHD Society Facebook Live telethon on September 12 to watch special appearances with Max Adler, patients and leading researchers.

About Max Adler
Actor Max Adler is best known for his work on the multiple award-winning hit shows "Glee" and "Switched at Birth," appearing as the closeted slushy throwing football bully Dave Karofsky, and class clown accused of sexual assault Tank, respectively. Adler can now be seen in the hit Sundance Festival film Mope, currently streaming on iTunes and Amazon, as well as Aaron Sorkin's The Trial of the Chicago 7, being released on Netflix on October 16, 2020, on which he also serves as co-executive producer. Adler is heavily involved with activism and charity organizations such as the It Gets Better Project in which his video has garnered over a half a million views on YouTube, The Trevor Project, GLAAD, and the FSHD Society. Witnessing his late mother and grandmother struggle with FSH Muscular Dystrophy sent Adler on a path to find a treatment and cure so no other family will ever have to battle this disease and struggle with it. Adler currently resides in Los Angeles with his wife, Jennifer, and newborn son, Dylan.

About the FSHD Society (http://www.fshdsociety.org)
The FSHD Society is the world’s largest research-focused patient organization for facioscapulohumeral muscular dystrophy (FSHD), one of the most prevalent forms of muscular dystrophy. The Society has catalyzed major advancements and is accelerating the development of treatments and a cure to end the pain, disability, and suffering endured by one million people worldwide who live with FSHD. The FSHD Society has transformed the landscape for FSHD research and is committed to making sure that no one faces this disease alone. The Society offers a community of support, news, and information through its website at https://www.fshdsociety.org.