Dealership sponsored the golf tournament that took place on June 12. 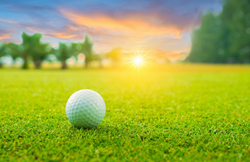 Glenn Polk Autoplex was a sponsor of the golf tournament and had a table set up at hole 16.

On June 12, 2020, 31 teams gathered for the Gainesville Area Chamber of Commerce Golf Tournament which took place at the Gainesville Municipal Golf Course. Glenn Polk Autoplex was a sponsor of the golf tournament and had a table set up at hole 16. The dealership had snacks, beverages and swag available at its table.

The golf tournament was an all-day event. Registration was open at 10:30 a.m. When team registered, there were raffle board spaces that could be purchased, mulligans that could be purchased and other free challenges for teams to take advantage of. Lunch was served by Dieter Bros. at 11:30 a.m. and the shotgun start was at 12:30 p.m.

When competitors arrived at the first hole, they were greeted with a camera and were able to have a team photo taken. As teams finished up playing, they were given snacks from Chicken Express on the way back to the clubhouse.