According to New Metaari Market Research, Over $11.6 Billion was Invested to 516 Edtech Companies Across the Globe in the First Half of 2020 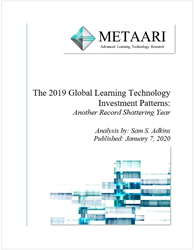 "The investment activity in the first half of 2020 could be an anomaly considering that huge unprecedented funding that went to just a few edtechs," comments Sam S. Adkins, Chief Researcher at Metaari (formerly Ambient Insight). "A breathtaking $1 billion went to China's Yuanfudao in March 2020. This is the first time in the industry's history that a company has reached the $1 billion threshold. In June 2020, an equally impressive $750 million went to China's Zuoyebang who claims to be the largest online education provider in the world with over 800 million users and 50 million daily active users (DAU)." Both of these companies are online tutoring firms.

"Investment patterns are inherently unpredictable," says Adkins. "The patterns produce a quantitative 'rear-view mirror' perspective, but they are not reliable leading indicators. Investments have spiked every year since 2015 reaching an unprecedented $18.6 billion in 2019. To put this in perspective, investments in 2018 and 2019 combined far outstripped the total investments made to all edtech companies combined for the entire twenty-year period between 1998 and 2017."

Metaari principals have been tracking the global learning technology investment patterns since 1998 when they were employed in the Advanced Knowledge Engineering Group at Microsoft. They launched the world's first global online learning business, the Microsoft Online Institute (MOLI).

Metaari has published their annual edtech investment patterns whitepaper since 2004. The most recent is the "The 2019 Global Learning Technology Investment Patterns: Another Record Shattering Year" published in January 2020. The free whitepaper has 87 pages, 12 tables, and 13 charts.

To obtain the free whitepaper, email your request to: research@metaari.com

Investment patterns can surface "customer-facing" trends if funding shifts to companies that serve specific buying segments. Only $213.3 million was invested in companies serving the higher education and tertiary segments in the first half of 2020, although $815.8 million went to companies serving the PreK-12 segments across the globe. This is relatively impressive considering that PreK-12 companies garnered a total of $855.3 million for the entire year of 2019.

Investors are now mainly focusing on corporate (B2B) and consumer (B2C) edtech companies. These companies combined garnered $10.5 billion in funding in the first half of 2020. The massive funding going to consumer-facing learning companies in the last few years is what Metaari calls "retail education", with startups bypassing the traditional academic delivery channels.