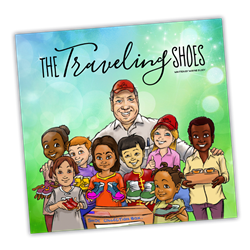 I've written a lot in my years as an entrepreneur. However, this is the book I'm most proud of writing..

Global business leader and philanthropist, Wayne Elsey, announced the publication of his latest book, The Traveling Shoes, which was illustrated by Jerry Rosembert Moise. Unlike his previous books, which dealt with leadership, business, and self-development, this book was written for children.

Elsey is the world’s leading social entrepreneur helping organizations raise money through shoe drive fundraisers. These fundraisers also keep footwear out of the trash and provide inventory to more than 4,000 micro-entrepreneurs in developing nations seeking work opportunities to help themselves out of poverty. The book was written from the point of view of his six-year-old granddaughter, Aubree. As his oldest grandchild, the story tells of Aubree's experience, as well as that of her brothers, Aiden and Jaxon, and their family making a social impact with shoes.

Upon the book publication, Elsey said, "I've written a lot in my years as an entrepreneur. However, this is the book I'm most proud of writing, because it explains how we can each make a positive difference in the world—including children. You're never too young or too old not to help someone else. Since my family is my priority, aside from my businesses, I'm also happy to have the opportunity to create a legacy for my grandchildren that I hope they will treasure someday in the future when they have grown."

This book is available at Amazon.

About Wayne Elsey
Wayne Elsey is the Founder & CEO of Elsey Enterprises. The company offers its services to social enterprises, nonprofits, and businesses looking to make the biggest social impact possible. It achieves this through Funds2Orgs Group, which is the most significant shoe drive fundraising suite of brands in North America, Not Your Father’s Charity, SocialGoodU and CELG Freight. Elsey is also the founder and former CEO of Soles4Souls, a nonprofit that helped put millions of shoes on the feet of those in need in response to some of the world's largest natural disasters. Elsey has been featured on NBC Nightly News, Good Morning America, Today Show, & Fox News. He is also the author of Almost Isn’t Good Enough, the Not Your Father’s Charity book series, and Get Off the Couch: Grip & Rip and Break the Barriers Holding You Back in Life. Elsey is available for interviews and speaking engagements.