In an effort to understand the full extent of the Asian Turtle Crisis and other turtle populations around the world, researches from a special group of the International Union for Conservation of Nature (IUCN) analyzed official and provisional assessments of all known tortoises and freshwater turtles. This analysis, published in Chelonian Conservation and Biology, reinforces the need for turtle and tortoise conservation worldwide. 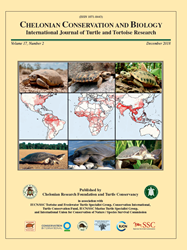 Trade in turtles and tortoises in Asia has been growing at such an unsustainable rate that the problem has been dubbed the Asian Turtle Crisis. Other threats, including habitat loss, predators, invasive species and pollution, have been reducing populations even further. In an effort to understand just how great the risk of extinction is, researchers from a specialist group of the International Union for Conservation of Nature (IUCN) analyzed official and provisional assessments of all known tortoises and freshwater turtles, numbering some 360 species.

To ensure thorough analysis, researchers looked at both the current official IUCN Red List and a provisional list compiled by the IUCN specialist group. They created species richness lists for turtles in several regions of the world, calculating percentages of imperiled species and determining average threat levels for these species. They then compared their results with those for other threatened vertebrates.

The researchers found that of the 360 recognized turtle and tortoise species, more than 56 percent are considered threatened; when including already-extinct species, that percentage rises to nearly 60 percent. The percentages are highest for Asian turtles, despite a rich diversity of species in the region. Asian freshwater and semiterrestrial turtles of the Geoemydidae family face the greatest risk compared to other Testudines species. Of the large vertebrate groups, only primates have a higher percentage of threatened species.

“Turtles are in terrible trouble and we need to mobilize even greater international efforts to prevent many of them from slipping into extinction,” said researcher Anders G. J. Rhodin. “As a response to this impending turtle extinction crisis, over the last few decades we have seen the emergence of several turtle-focused NGOs [nongovernmental organizations] and the growth of an increasingly engaged international turtle conservation community. This article should continue to raise global awareness of the precarious conservation status of many of these animals.”

The researchers emphasized the importance of this first assessment of the worldwide status of all turtle and tortoise species for ongoing conservation efforts. They see their review as a guide for those undertaking research, designing conservation policies and launching strategic actions to help these populations. “This analysis will help to focus increased conservation attention on this group of charismatic and popular animals,” Rhodin said.

Full text of the article “Global Conservation Status of Turtles and Tortoises (Order Testudines),” Chelonian Conservation and Biology, Vol. 17, No. 2, 2018, is now available at http://www.chelonianjournals.org/loi/ccab