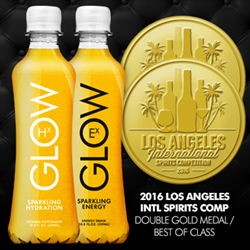 There were a total of 168 Best in Class Awards, selected from over 3,010 entries received from over 23 countries. This was the first entry into any competition for GLOW Beverages and the win adds another major accomplishment during their launch year.

GLOW Energy is a functional hydration, anti-hangover and energy beverage. “We had an ambitious idea to create a quality drink that not only tastes great, but stands out from the cans.” stated CEO, John Larson. John went on to say, “GLOW boasts a proprietary blend of amino acids, vitamins and electrolytes designed to keep you from experiencing nasty hangover symptoms. We are extremely proud of what we've created. My team and I really took our time with this, it took 2 years to test and develop and I think we've made the perfect drink!”

GLOW Energy and other award-winning entries will be available for the public to experience during the Los Angeles County Fair from September 2 to 25 in the “Corks & Pints” section of the Fair.

ABOUT GLOW BEVERAGE COMPANY http://www.GLOWBeverages.com
GLOW is available in 2 delicious beverage formulas, GLOW Hydration and GLOW Energy. Both formulas are packed with a proprietary blend of amino acids and vitamins that we call the X Factor. The X-Factor is a restorative combination of electrolytes, amino acids, vitamins and nutrients that refresh your body after a long night or a tough day. The GLOW of renewed energy, vitality and internal wellness after a long night of one too many drinks, a brutal workout or a hot day in the sun. No prescription required to feel this GLOW! GLOW sparkles on your tongue! It’s light, refreshing and it tastes great.

ABOUT THE LOS ANGELES INTERNATIONAL SPIRITS COMPETITION
For more than seven decades the Los Angeles International Wine Competition has bestowed gold medals to the best wines from around the globe. With the evolution of the competition, and a resurgence in cocktails and mixology, it was inevitable that distilled beverages be included in the judging. In 2007, the inaugural spirits portion of the newly renamed Los Angeles International Spirits Competition was opened to Blue Agave Tequilas. The event was such a success, the competition was opened to all spirits and mixers in 2010. Our judges, world-renown journalists, pub and bar owners & distillers - weigh spirits against one another, awarded gold, silver and bronze to the most deserving. Like its partner wine competition, the spirits competition is well on its way of becoming the most prestigious judging show in the world.