Golden Gate Ventures is proud to announce the promotion of one it's longest-serving team members, Jeffrey Chua, from Senior Associate to Principal. Jeffrey, or 'JC' as his colleagues refer to him, joined as an intern in 2015 shortly before the close of the firm's second fund. 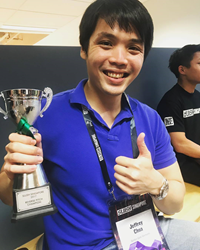 Golden Gate Ventures, the Southeast Asian early-stage fund that invested in companies such as Carousell, Homage, RedMart, and HipVan, is pleased to announce the promotion of Jeffrey Chua from Senior Associate to Principal. Jeffrey, or ‘JC’ as his colleagues refer to him, spent almost two years in a Senior Associate role, and is one of Golden Gate Ventures’ longest-serving team members, having joined as an intern in 2015 shortly before the close of its second fund.

JC is responsible for sourcing some of Golden Gate Ventures’ most exciting early-stage deals, such as BukuWarung and Rukita, and structuring Golden Gate Ventures’ GoPlay investment. In his 5 years with the firm, he’s been involved in a number of critically important initiatives, including supporting the GO-JEK acquisition of Mapan. He is a master at financial modeling and has trained countless interns on the boundless mysteries of Excel.

For those of you that know him, JC is a tireless, diligent investor that gets tremendous joy rooting out the smallest bit of industry gossip from his friends and colleagues, especially if it means sourcing competitive deals before any else. He’s well-respected by his colleagues, co-investors, and most importantly, entrepreneurs. He’s built a great reputation as someone that is honest, trustworthy, and pro-entrepreneur. He holds a number of honors, including winning Slush’s “Reverse Pitch” competition, where VCs pitch to entrepreneurs.

JC has a sartorial reputation amongst his colleagues; often showing up to work outrageously over-dressed, with a McDonald's bag in tow. He’s been known to pull a prank, or two, around the office, and his passionate love for karaoke is infamous. JC graduated from New York’s Pace University in 2011 and has had the same hair-style since 2004.