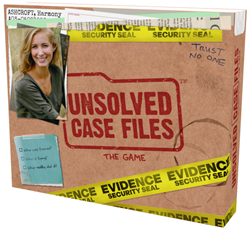 “Put all your crime junkie knowledge to work and see if you’re better than the detectives on TV.” said Mary Higbe, Director of Marketing for Goliath.

Unsolved Case Files recently made its grand debut on brick and mortar shelves with exceptional sales.

Unsolved Case Files was created by John Carroll and Lou Wilson. When it launched on Amazon in November 2018 it quickly became a viral hit with over 1.3K positive reviews, and a fanbase of 55K across the social landscape.

Harmony Ashcroft is the first case file of the series, now available at Walmart and Target.

Players take on the role of amateur detectives tasked with solving a murder that happened years ago. Players only have the original investigator's case file to help, as they work to uncover clues and put together evidence to convict the killer.

“We think this is the perfect time for Unsolved Case Files to be launched at mass retail,” said Mary Higbe, Director of Marketing for Goliath.

“People are bingeing true crime TV and podcasts. Unsolved Case Files gives them a chance to bring the action to life! Put all your crime junkie knowledge to work and see if you’re better than the detectives on TV.”

The game is brought to life with over 50 realistic components, such as newspaper articles, crime scene photographs, evidence, interrogations, statements and more.

The online companion site works to guide players through the game with carefully cultivated hints and revealing the answers when players have cracked the case.

Media samples are available upon request; please reach out to Goliath’s PR Team at a.lloyd@goliathgroup.com.

Goliath was founded in 1980 by Adi Golad and he cofounded Goliath’s USA division with David Norman in 2008. Goliath is one of the few remaining family-owned global toy and game companies. Goliath is now a global manufacturer and distributor of a broad range of products. Examples include Wahu®, Rocket Fishing Rod®, Rummikub®, Rubik’s Cube®, Tri-Ominos®, Sequence®, Pop the Pig®, Doggie Doo™, Gator Golf®, Let’s Go Fishin® and Phlat Ball® .