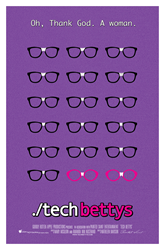 ./about
TECH BETTYS is the brainchild of Mary McGloin and Amanda Van Nostrand and their collective experience working in male dominated tech startups IRL. Inspired by actual events and people of tech; you’ll see everything you've heard about startup culture is likely true. McGloin serves as series lead, showrunner, and executive producer. She is joined by an all female crew, including award winning director Kathleen Davison (Primrose Lane, Effloresce).

TECH BETTYS has been featured as an official selection in over twenty film festivals all over the world, with over thirty nominations, thirteen awards, including Best Web Series at Circle City Film Festival and Festival Angaelica.

GOODLY ROTTEN APPLE PRODUCTIONS LLC (GRAP) is a critically acclaimed theatre and film production company; a place for artists to collaborate and do what we're meant to do- follow our higher calling: Art.

Group Meeting!The team contemplates the dangers of a mandatory 9am meeting