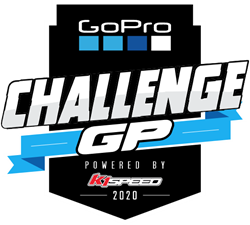 The GoPro Challenge GP will provide an exclusive opportunity for racers to use their personal GoPro device during their sessions. This will allow racers to study their fastest laps and share race experiences to a worldwide audience.

The Challenge GP race series is an annual championship for adults who are 18 years and older, with races held the first Sunday of every month at all K1 Speed locations. Each racer is awarded points based on where they finished in the final race.

Traditionally, the series has awarded racers based on the final points standings at the end of the year. Previous prizes for top finishers have included free races, merchandise, trophies, even enrollment in a racing school. With GoPro joining on as a partner in the series, incredible prizes will be up for grabs not just at year’s end, but throughout the year.

Starting in 2020, there will be a “championship within a championship” in the GoPro Challenge GP. The racer who scores the most points every three months (four months at locations outside the US) at their local K1 Speed will win a brand-new GoPro Hero8 Black - the latest product from the renowned action camera brand. Since racers can only win one camera per year, four different racers will win a camera by the end of the year (three different racers at international locations).

And the GoPro partnership doesn’t end there. The GoPro Challenge GP will provide an exclusive opportunity for racers to use their personal GoPro device during their sessions. This will allow racers to study their fastest laps and share race experiences to a worldwide audience.

“We’re thrilled to welcome GoPro as our title sponsor for Challenge GP,” says K1 Speed’s CEO. “They’re obviously a titan in the action camera industry, as we are in the karting industry. So, to have them come onboard for our adult racing series is an appropriate fit and should delight our millions of racers around the world. We can’t wait to see all the great footage!”

The 2020 GoPro Challenge GP series began Sunday, January 5, and continues monthly at every K1 Speed location. The cost for entry is $50 and includes three sessions: two qualifying races and a final race for position. Those interested can register at their nearest K1 Speed location. More information can be found at http://www.k1speed.com/challenge-gp .

Founded in 2003, K1 Speed is the world’s largest indoor kart racing operator with 42 locations worldwide and many more slated to open to 2020. K1 Speed offers a unique upscale entertainment concept for casual consumers, racing enthusiasts and corporate or group events.

K1 Speed is the first choice for anyone who wants to experience genuine racing. K1 Speed uses state-of-the-art zero-emission electric karts that are eco-friendly and safety oriented, while providing superior performance to traditional gas karts.

Each K1 Speed location is designed as a large entertainment venue with professionally designed tracks and cutting-edge décor showcasing authentic racing memorabilia along with ample seating and viewing areas, spacious lobbies, meeting rooms and a place to eat and drink.

ABOUT THE K1 SPEED FRANCHISE

The K1 Speed International Franchise started in 2016 to meet the international demand for a K1 Speed location. As a result of this program, there are now seven countries with at least one K1 Speed location: France, Canada, Mexico, China, South Korea, Puerto Rico and the United States. More countries - including Italy and Kuwait - are lined up to open later in 2020, while many other countries have signed up and are already in the planning phase.

The United States franchise program is anticipated to be as successful as the international franchise. In 2019, K1 Speed Bend in Oregon became the first domestic franchise to open. Many other United States locations are already in the planning phase to open sometime in 2020.