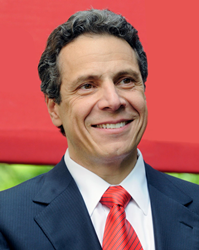 “This has been a challenging year, and as we celebrate the accomplishments and contributions of the Italian community virtually this year, I look forward to the day we can once again celebrate together because when we stand united, nothing can break us.”

The Columbus Citizens Foundation announced today that Governor Andrew Cuomo has been named Grand Marshal of the 76th annual Columbus Celebration Weekend. Governor Cuomo’s leadership during the COVID-19 pandemic and his strong ties to his Italian heritage were all factors in naming him as the 2020 Grand Marshal. In a typical year, New York City’s annual Columbus Day parade is the largest celebration of Italian American heritage and culture in the United States. This year, the Columbus Citizens Foundation is adjusting its Celebration Weekend, with a Virtual Gala on Saturday, October 10, a socially distanced Wreath Laying at Columbus Circle on Sunday, October 11, and a 90-minute broadcast special on Columbus Day, Monday, October 12.

Columbus Citizens Foundation is also proud to honor Dr. Anthony Fauci in its 2020 Columbus Celebration. Dr. Fauci is an obvious honoree this year for his unflappable dedication to keeping Americans safe. Dr. Fauci will also become the namesake of an annual Columbus Citizens Foundation graduate-level medical scholarship that will be awarded to those seeking to help the world through medical practice and public health policy – as Dr. Fauci has done for so many decades. An exclusive interview with Dr. Fauci will air during the WABC-7 special, as will a live performance from the Italian home of the world-renowned singer Andrea Bocelli.

In naming Governor Cuomo Grand Marshal, Columbus Citizens Foundation President Marian Pardo praised his success as a leader in a time of crisis, and his status as a true example for the Italian American community.

“The Governor’s calm and dedicated approach in dealing with the impacts of the COVID-19 virus made him a natural candidate for our Foundation to honor as our virtual parade leader in 2020,” Ms. Pardo said. “Though we find ourselves holding all our traditional events in a different manner these days, we are thrilled to have him as our Grand Marshal.”

“I am humbled to join the ranks of distinguished Italians and Italian-Americans who have served in this special role before me, and I thank the Columbus Citizens Foundation for all they do to support this community here in New York and across the country,” Governor Cuomo said. “This has been a challenging year, and as we celebrate the accomplishments and contributions of the Italian community virtually this year, I look forward to the day we can once again celebrate together because when we stand united, nothing can break us.”

Columbus Celebration Chairman Angelo Vivolo commented, “Governor Cuomo has long been an Honorary Chairman of our Columbus Celebration and a champion of our Italian American community – so we are all thrilled to have him serve as our 2020 Grand Marshal. He is “America’s Governor” – and is so deserving of this honor. Though there will be no traditional march up Fifth Avenue, we promise that our virtual celebration will highlight all that is good and great about the Italian American experience.”

During his governorship, Cuomo secured a number of historic reforms for New York State, including the 2011 Marriage Equality Act four years before the Supreme Court made it the law of the land; the first-in-the-nation program to provide tuition-free college at New York’s public colleges and universities for families making under $125,000 a year; the strongest Paid Family Leave program in the country guarantying 12 weeks of paid family leave; and a gradual increase of the state's minimum wage to $15. In response to the Sandy Hook Elementary School shooting in 2012, Cuomo signed into law the NY SAFE Act of 2013, the strictest gun control law in the United States. Cuomo cofounded the United States Climate Alliance, a group of states committed to fighting climate change by following the terms of the Paris Climate Accords, and he enacted a roadmap to achieve a carbon-neutral energy system for New York State by 2040, and an 85% reduction in greenhouse gas emissions statewide by 2050. Governor Cuomo has received national recognition for his handling of the COVID-19 pandemic in New York, one of the early states hit hard by the virus.

The tradition of a Columbus Day Parade began when Generoso Pope led a group of Italian Americans from East Harlem to Columbus Circle in 1929. The parade was formalized as an official celebration of Columbus and Italian heritage in 1944, and this year marks its 76th Anniversary.

ABOUT THE COLUMBUS CITIZENS FOUNDATION
The Columbus Citizens Foundation is a non-profit organization in New York City committed to fostering an appreciation of Italian-American heritage and achievement. The Foundation, through a broad range of philanthropic and cultural activities, provides opportunities for advancement to deserving Italian-American students through various scholarship and grant programs. The Foundation organizes New York City's annual Columbus Celebration and Columbus Day Parade, which has celebrated Italian-American heritage on New York's Fifth Avenue since 1929. For more information, contact jwilson@columbuscitizens.org