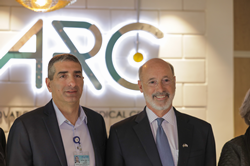 I see the connection between Sheba and Thomas Jefferson as the start of a great collaboration between Pennsylvania and Israel.

Governor Wolf visited the campus of Sheba’s ARC Innovation Center, which is the central hub for medical innovation in the State of Israel. He was joined by Dr. Mark Tykocinski, Provost of Thomas Jefferson University in Philadelphia, which has cemented a partnership with Sheba to deepen cooperation in the arenas of improved healthcare and medical innovation.

Governor Wolf and Dr. Tykocinski met with the founders of a range of start-up companies housed within Sheba’s ARC Innovation Center in order to gain a firsthand look at how the U.S. and Israel can collaborate to achieve medical breakthroughs that bring improved health to Americans, Israelis and the global community.

“Sheba is honored that the State of Israel picked us to be the official host for the governor,” said Sheba Director General Prof. Yitshak Kreiss, who hosted the Governor and his delegation. “At Sheba we capture the start-up mentality of Israel to create an ecosystem that will truly make an impact on the world.”

At a meeting with the leadership of Sheba Medical Center and its ARC Innovation Center, Governor Wolf said: “I see the connection between Sheba and Thomas Jefferson as the start of a great collaboration between Pennsylvania and Israel.”

During his tour of the ARC Innovation Center, Governor Wolf met with the founders of cutting-edge Israeli startups housed at Sheba including Datos, MDClone, Art Medical, Irody, Valera Health and Somatix.

Upon the conclusion of his visit, the Governor looked on as a tree was planted in his honor on the campus of Sheba Medical Center to commemorate and capture the spirit of the growing ties between Pennsylvania and Israel and its national hospital.

Governor Wolf was presented with a gift from Prof. Kreiss, a glass tree sculpture crafted by an Israeli soldier with severe PTSD who received treatment and was rehabilitated at Sheba Medical Center.

Born together with Israel in 1948, Sheba Medical Center, Tel HaShomer is the largest and most comprehensive medical center in the Middle East. Sheba is the only medical center in Israel that combines an acute care hospital and a rehabilitation hospital on one campus, and it is at the forefront of medical treatments, patient care, research and education. As a university teaching hospital affiliated with the Sackler School of Medicine at Tel-Aviv University, it welcomes people from all over the world indiscriminately. To learn more, visit: eng.sheba.co.il.