If you invested in any of the GPB Capital funds through a registered brokerage firm, stock broker or financial advisor you may have options for recovery. 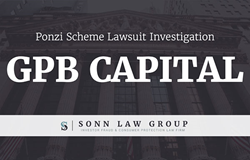 GPB Capital is being investigated as a possible Ponzi scheme.

Sonn Law Group attorneys represent individual and institutional investors who have lost money as a result of unsuitable investment advice.

If you invested in any of the GPB Capital funds through a registered brokerage firm, stock broker or financial advisor, contact investigating attorney Jeffrey Sonn via phone (866-266-1766) or online (SonnLaw.com/Contact-Us/) to discuss your case.

In effect, this means that GPB Capital Holdings is a seller of private placements. Often these sales are made to investors through brokerage firms. Under Regulation D, private placements are not subject to many standard securities disclosure requirements. As a result, these types of investments tend to be risky and they typically have high fees. They are not suitable for most investors.

On June 20, 2019, GPB Capital reported losses of 25.4% and 39% in its two largest funds, GPB Holdings II and GPB Automotive Portfolio, respectively. GPB Capital Holdings is also being investigated by federal and state agencies on suspicion that it is a Ponzi scheme after allegations by one of the firm’s former business partners. The investigation comes after the firm first failed to report financial information to the SEC regarding their largest funds, then later in the same year when it announced it would no longer pay distributions to investors. Affected GPB Capital Funds include: