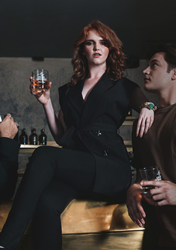 Grace O’Malley was a woman far ahead of her time. We’re embodying the spirit of this phenomenal woman in our new campaign in the form of many different women who are living representations of the Pirate Queen.

Celebrating female leadership through rebellious spirit, Grace O’Malley Irish Whiskey announces the launch of a new advertising campaign, Meet the Queen of Irish Whiskey, in the US market as well as in Germany and Ireland. The campaign aims to communicate the brand’s support of a powerful image of women, as presented by the 16th-century seafarer, clan chief, and legendary pirate, Grace O’Malley, one of the world’s most extraordinary female trailblazers.

With her keen sense of community and justice, determined perseverance, and resourcefulness, Grace O’Malley left a lasting mark on Ireland both during her life and throughout Irish folklore for generations. Inspired by her energy and modern outlook, the current campaign of this young Irish whiskey brand uses their flagship whiskey, Grace O'Malley Blended Irish Whiskey, to elevate all women.

Speaking about the new campaign, Heather Clancy, Brand Manager for Grace O’Malley Spirits, said, “The time is right for the ‘Queen of Irish Whiskey’. Irish whiskey has seen a rapid rise in female consumption of Irish Whiskey in the last ten years. Grace O’Malley was a woman far ahead of her time. We’re embodying the spirit of this phenomenal woman in our new campaign in the form of many different women who are living representations of the Pirate Queen. We are not trying to create a female-only brand but rather include everyone in the conversation around whiskey and break down the stereotypes of what a typical whiskey consumer is and take away the snobbery that can surround the category.”

Similar to the brand itself, the campaign is designed to appeal to an international audience and will be rolled out via select online and OOH campaigns. Primarily targeting the 24–45-year-old consumer, the campaign will be supported by POS materials displayed at key wines and spirits in select locations. The campaign was developed entirely in-house by an all-female team and rolled out in Ireland, Germany, and the US from October 2021. The plan is for sustained visibility in OOH, social media, and at POS.

About Grace O’Malley Spirits
As a fast-growing Irish spirits company, Grace O’Malley excites the senses with their premium blended whiskey, boasting one of the highest malt contents in the blended whiskey category at 46% and providing for a smooth complexity never before tasted. Each of Grace O’Malley’s fine spirits is distilled at The Great Northern Distillery. It is in this center of whiskey excellence that Grace O’Malley’s Master Blender, Paul Caris, together with Master Distillers of The Great Northern Distillery bring the magic to Grace O’Malley Whiskey from distilling to blending and cask management. In addition to whiskey, experience the taste of Ireland with Grace O’Malley’s Heather Infused Irish Gin: a traditional-style gin made with modern distilling techniques drawing inspiration from the native flavors of Ireland. Grace O’Malley Spirits are widely distributed in Europe and currently imported in the U.S. by MHW. Grace O'Malley Whiskey is now available at leading off-premise accounts in the U.S. including Simply Wine in New York City with information available on SevenFifty. To learn more of the story of Grace O’Malley – the Irish Pirate Queen from the west coast of Ireland and inspiration to rebel hearts around the world -- visit graceomalleywhiskey.com. You can also join the conversation at @graceomalleyspirits.