“‘The Great’ Awakening” from Christian Faith Publishing author Grady Russell is an in-depth narrative that delves into the origins and heritage of Constantine the Great in the foundation of Christianity. 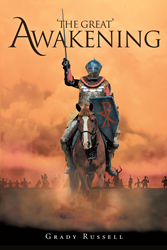 “‘The Great’ Awakening”: an enthralling read that discusses the life and accomplishments of Constantine the Great in the formation of the Christian faith. “‘The Great’ Awakening” is the creation of published author Grady Russell, a teacher, historian, world traveler, father, grandfather, and husband.

Russell shares, “God used one ruler to change the future of Rome and Christianity in Rome forever.

“What made him different than all the rulers before him? Why would he undertake such a task?

“In the pages of this book, you will walk with this man through one of the most amazing periods in the growth and preservation of Christianity in the western world.

“Based on historical events and Constantine’s letters, you will walk through the time from before his birth to his death, through the meteoric cultural changes of the day. In the pages of this book, you will experience the events that guided the path of a man who came to be known as Constantine the Great.

“Much has been written about Constantine over the centuries. Some believe him to be a Christian saint while some believe him to be an agnostic ruler protecting Christians only for political reasons. This writing attempts only to introduce you to Constantine the man, who or what shaped him, what he believed and fought for based on his own writings, and the world-changing actions he took during his reign.

“‘What didn’t you do to bury me, but you forgot that I was a seed’ (Dinos Christianopoulus, Greek poet).”

Published by Christian Faith Publishing, Grady Russell’s new book strengthens the knowledge of individuals on how God’s providence led one man to pave a path for Christianity’s widespread impact in the world.

This book presents a comprehensive flow of events that brought Constantine to remarkability through the power of God’s will and purpose for His people.

View the synopsis of “‘The Great’ Awakening” on YouTube.

Consumers can purchase “‘The Great’ Awakening” at traditional brick-and-mortar bookstores or online at Amazon.com, Apple iTunes store, or Barnes and Noble.

For additional information or inquiries about “‘The Great’ Awakening,” contact the Christian Faith Publishing media department at 866-554-0919.