Fort Dodge, Iowa Community Is Seeking An Original Artist Design And Qualified Painting Contractors For A Large Scale Mural To Be Located In The Northwest River District

A 110’ concrete grain silo located adjacent to the Des Moines River and Hawkeye Bridge will be transformed into a work of art as identified in the Northwest River District Revitalization Plan. The Fort Dodge community is currently seeking design proposals from artists and statements of qualifications from painting contractors, with plans to complete the project by the fall of 2017. 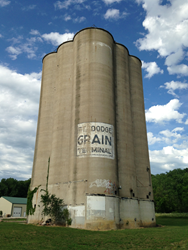 “The Northwest River District is a prime area of the Fort Dodge community for redevelopment that includes recreational amenities and projects like the proposed mural,” states Carissa Harvey, Senior Planner with the City of Fort Dodge.

Located by the Des Moines River and in a district that is planning for many significant improvements is a 110’ silo that previously housed grain harvested by area farmers. Currently owned by Extreme Adventures, LLC and now vacant of the grain that it was designed to hold, it offers an excellent opportunity to be repurposed into a work of art.

The silo is located along Hawkeye Avenue in a highly traveled district that sees approximately 7,300 vehicles pass by every day. It is also visible from several vantage points in the community, including the Des Moines River.

The goal of this project is to establish a mural that highlights or reveals what is unique about the Fort Dodge Community and Northwest River District. Projected completion is scheduled for the fall of 2017.

Request for Qualifications for painting contractors is currently available with submission briefings to be held November 14th, 15th and 21st. Statements of Qualifications (SOQ)'s must be submitted no later than December 12th. Interested contractors are asked to go online to download the RFQ and to attend one of the upcoming briefings.

Artists to create the design for the mural are encouraged to attend the briefings as well and to go to the Request for Proposal to learn how to submit their visions for the mural, also due by December 12th.

“The Northwest River District is a prime area of the Fort Dodge community for redevelopment that includes recreational amenities and projects like the proposed mural,” states Carissa Harvey, Senior Planner with the City of Fort Dodge. “We are a community that was built on the Des Moines River and we would like the mural to reflect this and celebrate our community’s past, present and future.”

Additional information is available by contacting Carissa Harvey at the City of Fort Dodge, 819 1st Avenue South, Fort Dodge, IA 50501 or by emailing your request to fdpublicart(at)gmail.com. The City of Fort Dodge is a regional hub located in North Central Iowa. Everyone is encouraged to visit the website at http://www.fortdodgeiowa.org or ask questions by calling (515) 576-8191.