The producer – who’s collaborated with Justin Bieber, Destiny’s Child, Mary J. Blige, and others – will assist with the venue’s diversity and inclusion initiatives & lead new Artist Advisory Board 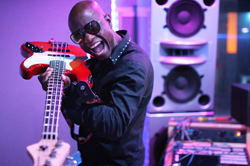 Jerry ‘Wonda’ Duplessis, a Grammy-winning record producer, has been appointed to the Board of Directors at Newark Symphony Hall. (Courtesy of Jerry Wonda)

"We’ll draw upon Jerry's unmatched expertise for everything from programming, to career paths and ongoing social justice efforts. We cannot wait to begin this partnership," said Taneshia Nash Laird, president and CEO of Newark Symphony Hall.

Newark Symphony Hall, one of New Jersey’s largest arts and entertainment venues, today announced that Newark Mayor Ras Baraka has appointed Grammy-winning record producer, Jerry “Wonda” Duplessis, to the venue’s Board of Directors. Wonda, also a composer and touring musician, will assist with the Symphony Hall’s various diversity and inclusion initiatives, while also chairing a new Artist Advisory Board – deepening relationships with legendary musicians that have graced the venue’s stage.

“We cannot be happier that Jerry ‘Wonda,’ one of the foremost musicians and producers of the past three decades, has been appointed to our board,” said Taneshia Nash Laird, president and CEO of Newark Symphony Hall – and the only Black female leader of a performing arts center in New Jersey. “He’ll advise on a comprehensive program creating live music career pathways both onstage and behind the scenes, while representing our historic venue among scores of iconic ‘alums.’”

Wonda, the Haiti-born, self-taught musician, rose to prominence as the bassist and producer for groundbreaking hip-hop group, the Fugees, whose lineup included Wyclef Jean, Lauryn Hill and Pras Michel. The Fugees’ 1996 album, “The Score,” became one of the best-selling hip-hop albums of all time.

Wonda went on to produce artists including Whitney Houston, Destiny’s Child, Carlos Santana and Shakira, among others. With over 200 million records sold, his work has garnered 15 Grammy nominations, and he is the winner of three – including Best Album for Santana’s 1999 success, “Supernatural,” an album that went 15x Platinum and sold an estimated 30 million copies worldwide.

"Growing up in and around Newark was the catalyst of my musicianship. I am one of the many beneficiaries of its rich history and the work of our forefathers. What resonates so deeply for me about Newark Symphony Hall – aside from its storied past – is its commitment to improving the city’s historic Lincoln Park neighborhood, and its focus on making arts and entertainment more inclusive,” said Wonda. “I’m honored to be a part of the hall’s preservation and the future development of such a great venue and city using arts as an economic driver.”

On his appointment, Nash Laird added: “Jerry’s accomplishments speak for themselves – earning the industry’s top prize while collaborating with some of the most successful artists of all time. We’ll draw upon his unmatched expertise for everything from programming, to career paths and ongoing social justice efforts. We cannot wait to begin this partnership.”

Wonda also recently produced Baraka’s timely spoken-word EP, “What We Want.” A video for the title track – shot at Newark Symphony Hall by fellow board member Ayana Stafford-Morris – has garnered millions of online views, touching upon topics of systemic oppression and social injustice.

Newark Symphony Hall, located at 1020 Broad St. in Newark, was built in 1925 and added to the National Register of Historic Places in 1977. It is owned by the City of Newark and operated by the nonprofit Newark Performing Arts Corporation. Some of the Symphony Hall’s legendary acts over the years have included Placido Domingo, The Rolling Stones, Jimi Hendrix, Bob Dylan, Tony Bennett and Aretha Franklin, among others.

The venue recently began production on its original showcase, “The Soul of Newark Symphony Hall.” A celebration of “Black Newark” told through narration, reenactments, music and cinematic and photographic montage, the project was developed by scholar and composer Guthrie P. Ramsey, Jr., and will premiere in January 2020. Prospective cast members have responded to an open casting call and will be selected by a panel of judges – announced in a live-streamed event, “The Voices,” airing Dec. 18.

About Newark Symphony Hall
Born in 1925, Newark Symphony Hall (NSH) has been the home of almost a century of arts and culture in what is now one of New Jersey’s oldest and largest arts and entertainment venues. NSH remains as committed as ever to providing an artistically rich experience for art lovers of all ages, while creating career pathways for people of color from around the world – and bettering both its community and the Greater Newark region. Its “Symphony of Survival,” a creative project led by Newark poet Jasmine Mans as part of the venue’s #EmbraceNewark initiative, features writings, footage and photos by 10 talented local Black artists documenting their pandemic experience. For more information, visit: http://www.NewarkSymphonyHall.org.

Newark Symphony Hall welcomes Wonda as its newest board member, who will assist with various diversity and inclusion initiatives & lead a new Artist Advisory Board. (Courtesy of Jerry Wonda)

In addition to the new board announcement, the historic venue continues to work on several programming and economic development initiatives. (Courtesy of Newark Symphony Hall)