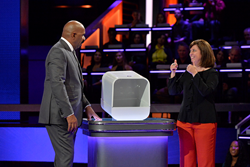 “After several years of designing and researching only the most durable materials, the Grand PooBox is one litter box cat lovers won’t want to hide”, says Courtney Karsted.

Steve Harvey's FUNDERDOME, by Mark Burnett, is a seed-funding competition reality series where two budding entrepreneurs go head-to-head to win over a live studio audience to fund their ideas, products or companies. The audience represents the "customer" and, as the customer is always right, they vote to determine the winner.

In each round, following the pitches and before Steve Harvey reveals the results of the crowd's majority vote, the entrepreneurs face a major dilemma: one of the entrepreneurs is allowed to cash out and walk away for a lesser amount. But if an entrepreneur cashes out, they forgo the opportunity to win the whole cash prize for that round—a good move if they lost the crowd vote, but a bad move if they would have won it.

The Grand PooBox™ is a whole new breed of cat litter box, specifically designed for small, urban spaces. The unique design helps to contain the litter with the addition of an internal grated ramp. The ramp helps to reduce the amount of litter strewn around the outside of the box as the cat walks up and out.

The Grand PooBox™ is equally economic by using 50% less litter to fill the rear receptacle. This is a money saving idea for urban areas where the cost of living tends to be higher.

Ms. Karsted is also proud to announce in addition to the TV Show appearance, a local Portland bank, Albina Community Bank, has stepped in to fund her business venture 110%. “I couldn’t be more excited for the support and encouragement I’ve received at Albina. I’m a true believer in Keeping It Local”, commented Ms. Karsted.

The Grand PooBox™ retails at $85.00. The company is currently accepting Pre-Orders at a 20% discount totaling $68.00 between August 2017 and November 2017. With the steel molds in production, The Grand PooBox™ will be rolling off the assembly line ready to hit the market early to mid-November 2017 in time for the holiday gift-giving season.

About Steve Harvey's FUNDERDOME
"Steve Harvey's FUNDERDOME" is produced by MGM Television and internationally distributed by MGM. The executive producers are Mark Burnett, Leslie Garvin and Barry Poznick. Created by Harvey and “Shark Tank” producer Mark Burnett, the series has entrepreneurs going head-to-head in pitching their ideas and winning seed money for their fledgling business. Contestants could pocket anywhere from $10,000 – $100,000, based on their ability to convince a live studio audience that they deserve to be funded.