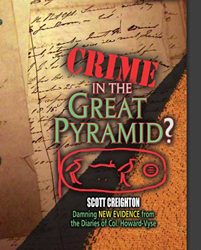 Accepted Age of the Great Pyramid Challenged by New Evidence

...the age of the Great Pyramid has been hotly debated for decades.

In a dramatic cover story, the July/August issue (#106) of Atlantis Rising Magazine takes on the long simmering debate over the authenticity of one of archaeology’s most cherished assumptions—that the Great Pyramid of Giza was built by the pharaoh Khufu about 4,600 years ago. In “Crime in the Great Pyramid” author/researcher Scott Creighton produces actual photos of pages from the personal diaries of Col. Howard Vyse, who, in 1837, claimed to have discovered what he termed the “Khufu Cartouche.” The Cartouche is the only tangible evidence, linking the Great Pyramid with Khufu. Drawings and notes in the diaries reveal that Vyse carefully planned the placing of painted markings in Campbell’s Chamber and was at some pains to make them look authentic. Ever since, Egyptologists have insisted that, even though the Cartouche was their only evidence, that their Khufu hypothesis is proven.

The Cartouche, however, has long been controversial. When Howard-Vyse used gunpowder to blast his way into the topmost chamber above the so-called King’s Chamber, many were immediately suspicious of his claims. The previously discovered Davison chamber, had no such markings. In fact, nowhere else in the Great Pyramid can such markings be found.

Earlier this year, a couple of German archaeology students managed to secretly enter Campbell’s Chamber and to remove a bit of paint from the Cartouche. This, they smuggled out of Egypt and to a lab in Dresden Germany for carbon dating. Their intention, apparently, was to prove that the Cartouche was not ancient but, instead, a modern forgery by Vyse. Citing lab findings, their aim was to refute the mainstream argument. The Great Pyramid, it was argued, could actually be much older than Khufu, something long believed by many alternative researchers. Whatever, the plan of the two German students, it backfired. The perceived enormity of their archaeological crime, provoked such an outcry from official Egyptology, that any question about the validity of their evidence was drowned out by the ensuing storm of outrage. And so, it appeared, the matter would rest. Until now.

Creighton’s discovery in March of this year in Vyse’s personal papers, provides damning evidence, never previously cited. The Atlantis Rising article includes plenty of detail, not only for serious students of Egyptian history, but for the fascinated layman as well.