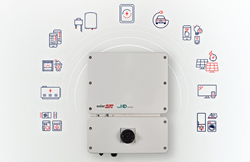 “Choosing SolarEdge as an inverter was a decision not taken lightly with many inverters out there. One of the most important things was preparing the customer's home to be future ready for a battery backup.”

What is a solar inverter?

Solar inverters (or PV inverters) are responsible for taking the variable direct current (DC) output of solar panels and converting them into a utility frequency alternating current (AC). In simple terms, it is the part of the solar energy system that takes the energy from the sun and converts it to usable electricity for a home or business.

The quality of an inverter directly affects the quality of the solar panel system as a whole. The better the inverter the more efficient the system and the more bang you get for your buck.

Because solar inverters play a critical role in a solar energy system, choosing the right provider was essential for GHS.

SolarEdge is an industry leader in power optimization including, but not limited to, solar inverters and monitoring systems for photovoltaic (PV) arrays.

Green home Systems managing partner Robbie Hebert says, “Choosing SolarEdge as an inverter was a decision not taken lightly with many inverters out there. One of the most important things was preparing the customer's home to be future ready for a battery backup.”

In addition to announcing that GHS is partnering with SolarEdge, they are also the first to announce that they will be using the new EnergyHub inverter and battery system.

What is a SolarEdge Energy Hub Inverter?

A SolarEdge Energy Hub Inverter is a battery ready inverter that will allow homeowners to upgrade when they are ready without the need to change the inverter. It uses Prism Technology (PDF) to streamline the energy conversion process. Instead of the traditional method of turning DC to AC and back to DC again, this new technology plans for integrating energy storage up-front.

This is a huge advance in the solar inverter game as it allows customers to save money by upgrading to get a more efficient output without buying an entirely new inverter.

GHS is proud to work with SolarEdge as they stay on the cutting edge of solar technology and are able to provide the highest quality inverters to the GHS family.