Bluejay Mining plc, the AIM (JAY.L) and FSE (S5WA) listed company with projects in Greenland and Finland, is pleased to announce that a recent study undertaken by the Geological Survey of Denmark and Greenland (‘GEUS’) has confirmed that the region in which the Company’s 100% owned Pituffik Titanium Project in Greenland (‘Pituffik’) is located, represents a very significant ilmenite province (‘the Dundas Province’). 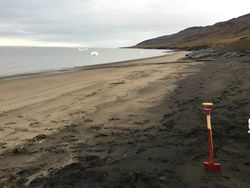 17 billion tonnes of pure ilmenite both in situ and available as naturally liberated primary ilmenite, with up to 700 million tonnes of ilmenite potentially occurring on the company 68 sq km licence area.

Importantly, the province level study, which covered an area of 300km x 150km, estimates that 10 billion tonnes of ilmenite exist in the original rock with up to 7 billion tonnes of mechanically eroded primary ilmenite made available for placer deposition within the project region. This potential volume of ilmenite is non-JORC but it does highlight that the province is potentially capable of hosting multiple ilmenite operations.

Pituffik contains the highest known proportion of this liberated ilmenite, both in terms of tonnes and grade, within the Dundas Province. This publication supports the Company’s recently reported JORC compliant mineral resource estimate of 23.6Mt at 8.8% ilmenite (in-situ) at Pituffik, which sits within a larger 90Mt to 130Mt exploration target with an in situ in-situ grade of between 6.3% and 8.4% ilmenite (in-situ). The maiden resource and exploration target covers approximately 17% of the raised beach and does not include Interlak or the shallow marine areas. The proposed development will initially start on a high-grade zone of 7.9Mt at 14.2% ilmenite (in-situ).

GEUS’s study involved scrutinising and correlating regional field maps, satellite images and oblique images as well as the regional geology, in particular the relative distribution and volumes of sill and dyke rocks in the sedimentary formations. Petrographic and mineralogical investigations were used to establish the relationship between normative ilmenite content and the true fraction of ilmenite in the source rock.

The Dundas titanium province is a new concept in the raw materials community. Bluejay has tenure over the natural pathway to the development of this newly identified titanium province through Pituffik and has the first mover advantage in this exciting region. This area has now been demonstrated to host a combined total of up to 17 billion tonnes of pure ilmenite both in situ and available as naturally liberated primary ilmenite, with up to 700 million tonnes of ilmenite potentially occurring on the company 68 sq km licence area.

Whilst these numbers are non-JORC, we are internally confident that the Dundas Province, which is analogous to the early stage identification of the west Pilbara iron ore province, will be seen for its true potential in the coming decades. The Company is now focused on the 2017 work programme and production of the feasibility study required for exploitation. Additionally, we are currently in discussions with a potential off-take partner that will facilitate our move towards production in 2018.

Bluejay has a number of highly prospective licences at various stages of development in Greenland and Finland. The Company is dual listed on the London AIM market and Frankfurt Stock Exchange.

The Company is currently focussed on advancing the Pituffik Project in Greenland, an area that has only recently revealed its mineral potential following changes in the climate. Pituffik, which Bluejay conditionally acquired in December 2015 and assumed 100% ownership of in March 2017, has demonstrated the potential to be in the top percentile of projects worldwide in terms of heavy mineral grade.

Raised beaches; containing ilmenite accumulations over widths of more than 1km, of unknown depths, along more than 20km of coastline;
Active beaches; which refer to the area seaward of the frontal dunes, including the beach, tidal zones and surf zone; and
Drowned beaches; refers to the areas seaward of active beaches.

The Company’s strategy is focused on the production of a bulk sample “proof of concept” from the Pituffik Project in 2017 with the aim of ultimately generating cash flow to create a company capable of self-funding exploration on future acquisitions.

Bluejay also holds a 100% interest in a portfolio of copper, zinc and nickel projects in Finland. This multi-commodity portfolio remains a strategic asset of importance and has been restructured to be cost-sustainable whilst determining the best plan for future development.